Sign in / Register
HomeInstrumentationsOrchestraJubilee Overture (after Rossini) for Chamber Orchestra [2014]

in the style of Rossini

By: Jules Riley
For: Orchestra
This music is in your basket
View basket
Loading... 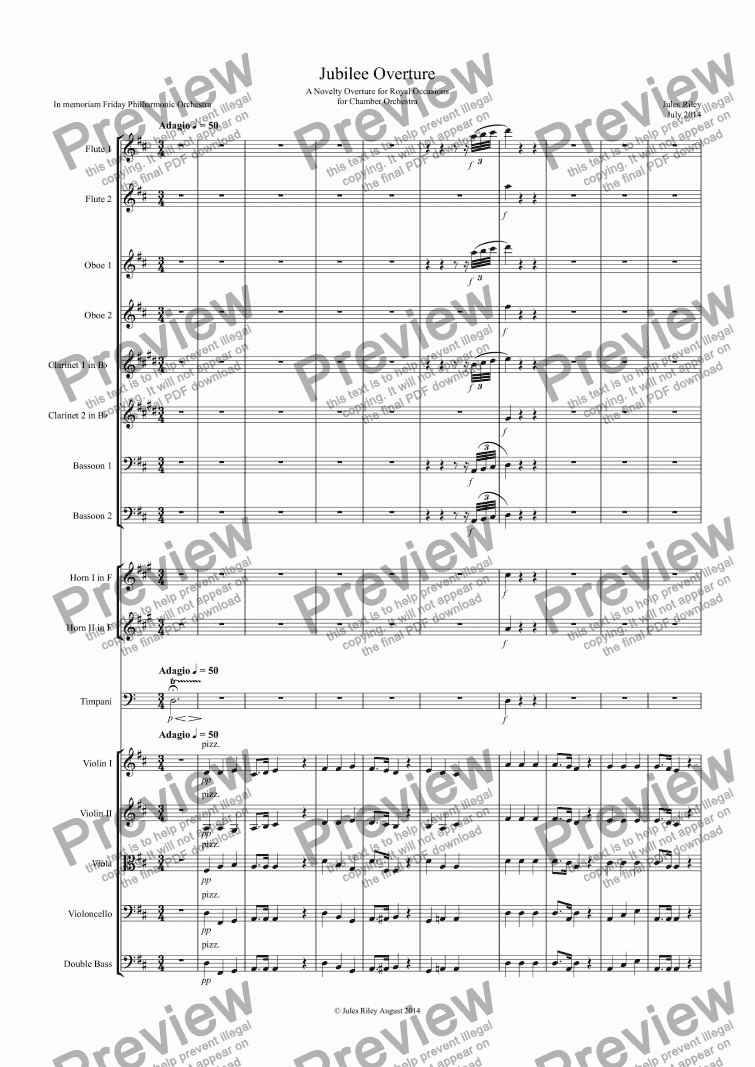 in the style of Rossini

By: Jules Riley
For: Orchestra

Composer
Jules Riley
Year of composition
2014
Difficulty
Difficult (Grades 7+)
Duration
10 minutes
Genre
Modern classical music
License details
For anything not permitted by the above licence then you should contact the publisher first to obtain permission.

I think it was the royal Jubilee in 1977 when I hit on the idea of the National Anthem starting in the style of the very beginning pizzicato of Rossini’s Overture to "The Italian Girl in Algiers". 2002 went whizzing by, and several Royal occasions later, I finally got round to completing it. Various other composers have sneaked in since then. If you look hard, I think you’ll find a bit of Weber, Sullivan, and Berlioz squirrelled away in there. The opening drum roll, or paukenwirbel as the Germans delightfully call it, is relevant, bearing in mind the patriotic theme of this overture… I remember a time, a long time ago now, when inside the folder on your music stand, there was always the National Anthem cellotaped in. In my youth, every public concert, almost without exception began with a drum roll preceding the National Anthem. It was traditional on these occasions for the audience to stand, but of course not to sing. I think it was the Benjamin Britten choral version that reintroduced us to the somewhat bizarre words of the third verse.

Meanwhile as you probably know, Rossini’s Overture to the "Thieving Magpie" starts with several big side drum rolls. In those days this invariably caught out half the audience, who couldn’t tell a side drum from a kettle drum much to the delight of the band, resulting in at least half of them rising to attention. If I’m not mistaken some mischievous conductors on these occasions would omit the National Anthem, thus maximising the probability of audience embarassment. If I had pulled the simila stunt included at the start of this overture back in those days, it would have genuinely offended almost everyone, and I would probably have been lynched. And even now, In this age of po-faced control freaks I probably won’t fare any better, and no-one will get my own little musical joke. I have always associated Rossini Overtures with musical fun. For instance, who hasn’t put a domino in at the beginning of the Allegro of "The Barber of Seville" and come in with the tune a bar early? Is it the same in the recap or not? Happy days! Although sounding a bit like a Rossini Overture, this piece is more a sequence of variations matching vaguely the outline of a typical Rossini Overture - slow introduction, allegro first subject, bridge passage and second subject and Rossini crescendo, but where the development and recapitulation should be, it skips straight to the final coda with a short slow section before the final run-in. Since there is only one theme (the National Anthem), I thought it might get a bit wearisome with a development and recap as well. JR 11/08/2014 little edit 18/9/2104

Reviews of Jubilee Overture (after Rossini) for Chamber Orchestra [2014]

Sorry, there's no reviews of this score yet. Please .
In order to submit this score to ScoreExchange.com Jules Riley has declared that they own the copyright to this work in its entirety or that they have been granted permission from the copyright holder to use their work. If you believe that this score should be not available here because it infringes your or someone elses copyright, please report this score using the copyright abuse form.