By: Composed by Muhammad Flayfel / محمد فليفل‎ Arr:Keith Terrett
For: String orchestra
This music is in your basket
View basket
Loading... 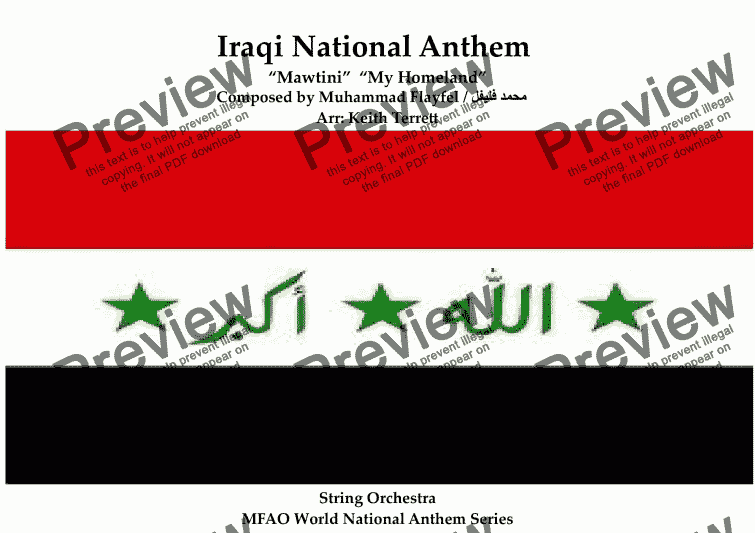 Composer
Composed by Muhammad Flayfel / محمد فليفل‎ Arr:Keith Terrett
Arranger
Keith Terrett
Publisher
Music for all Occasions
Difficulty
Moderate (Grades 4-6)
Duration
2 minutes
Genre
World music
License details
For anything not permitted by the above licence then you should contact the publisher first to obtain permission.

An arrangement for String Orchestra of the national anthem of Iraq.

After the ousting of the Saddam Hussein government, “Mawtini” was chosen as a new anthem for Iraq by the U.S. military administrator of the country after hearing it in a concert and admiring the song. “Mawtini” was sung by the Palestinians in their uprisings against the British mandate and the Jewish immigration to British Palestine in 1936-1939 (the anthem is also an unofficial anthem of Palestine), and continues to be popular with Arabs today, especially as a show of support with Palestine. The author of the lyrics is the Palestinian poet Ibrahim Touqan.

Mawtini (Arabic: موطني‎ “My Homeland”) is a popular poem written by the Palestinian poet Ibrahim Tuqan circa 1934. It was the de facto national anthem of Palestine since then. It is also recognized in Syria and Algeria, as well as other Arab states, as an anthem as to show their support for the Palestinian cause. The original music was composed by Muhammad Fuliefil. During the years it became very popular through the Arab world.

In 2004, it was re-adopted, on the order of Coalition Provisional Authority chief Paul Bremer as the national anthem of Iraq. It replaced the old anthem Ardh Alforatain, which was in use from 1981 to 2004 and associated with Saddam Hussein's Baath regime