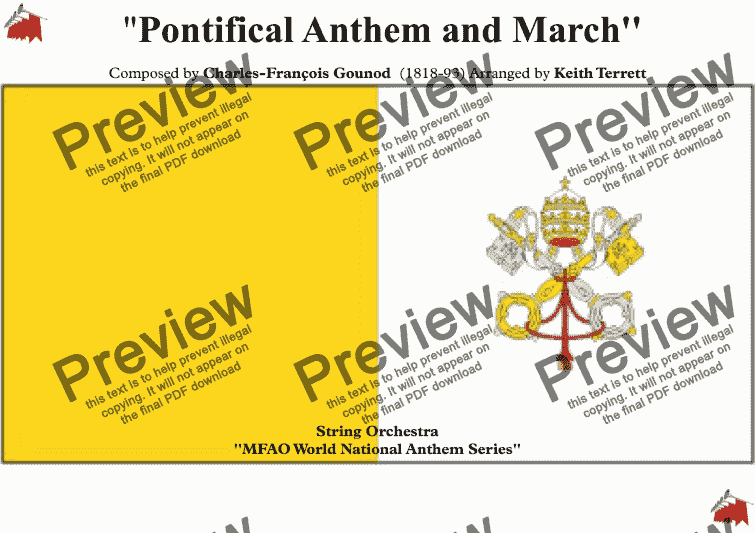 An arrangement of the Vatican State National Anthem arranged for String Orchestra.

The Pontifical Anthem and March (Italian: Inno e Marcia Pontificale), also known as the Papal Anthem, is the anthem played to mark the presence of the Pope or one of his representatives, such as a nuncio, and on other solemn occasions. When the Vatican's flag is ceremonially raised, only the first eight bars are played.

While the Papal Anthem also serves as the national anthem of the Holy See and the Vatican City State, the Vatican stresses that it "is not to be understood as a national anthem"; it is a composition whose words and music "speak to the heart of many throughout the world who see in Rome the See of Peter."

The music was composed in 1869 by Charles Gounod, for the celebration on April 11, 1869 of Pope Pius IX's golden jubilee of priestly ordination. The purely instrumental piece in three parts, originally called Marche pontificale (French for "Pontifical March"), became extremely popular from its first performance.

On October 16, 1949, Pope Pius XII declared it the papal anthem, replacing Viktorin Hallmayer's Marcia trionfale (1857), which, being still the papal anthem when the Vatican City State was founded in 1929, had been treated also as the new state's anthem. Gounod's Marche Pontificale was first performed in this new role during a ceremony on Christmas Eve of 1949, one day before the opening of the Holy Year 1950. The old anthem too was played for a last time, almost as a token of respect.

At that time, Antonio Allegra (1905–1969), who was then one of the organists of St. Peter's Basilica, wrote Italian lyrics for Gounod's music. Other lyrics have been composed for the music in various languages and by different authors. Some of these versions are not directly related to the papacy, e.g. Rudy Villanueva's Cebuano prayer, Yutang Tabonon ("Beloved Land"), for protection for the Philippines nation. In 1991, Raffaello Lavagna of Savona (born 1918) wrote Latin lyrics for a four-voice choir, on an arrangement by Alberico Vitalini. 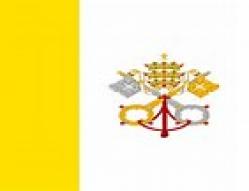