By: Ahn Eak-tay
For: String orchestra
This music is in your basket
View basket
Loading... 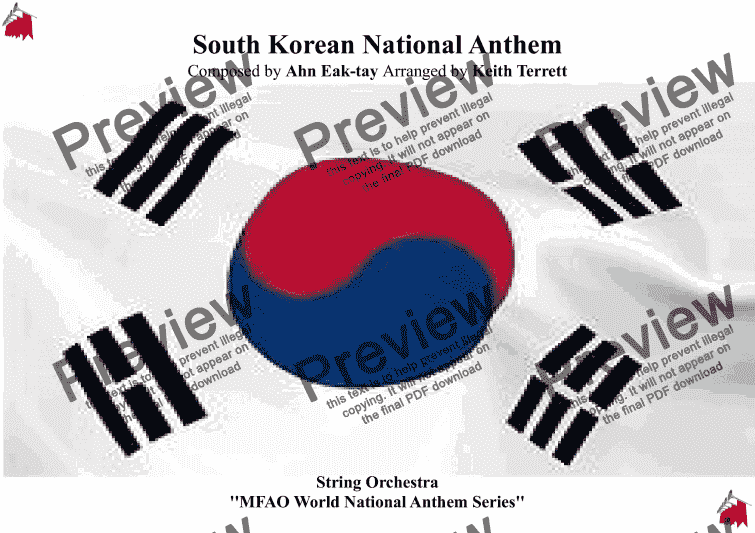 By: Ahn Eak-tay
For: String orchestra

Composer
Ahn Eak-tay
Year of composition
1896
Arranger
Keith Terrett
Publisher
Music for all Occasions
Difficulty
Moderate (Grades 4-6)
Duration
1 minute
Genre
Classical music
License details
For anything not permitted by the above licence then you should contact the publisher first to obtain permission.

An arrangement of the national anthem of South Korea arranged for String Orchestra. There are also versions for Brass Quintet & full Orchestra in store.

"Aegukga" (Hangul: 애국가; hanja: 愛國歌,Korean pronunciation: [ɛːɡukk͈a]; English: "Patriotic Song") is the national anthem of South Korea. It was written around 1896. The exact origins of the song are unknown, but the current official version was established on August 15, 1948.

The Encyclopedia of Korean Culture defines "Aegukga" as "the song to wake up the mind to love the country". "Aegukga" in itself is differentiated from a national anthem. While a national anthem is the official symbol of the country, Aegukga refers to any song, official or unofficial, that contains love towards its country, such as Hungary's Szózat. However, the nationally designated "Aegukga" plays the role of symbolizing the country. In general, the term Aegukga refers to the national anthem of South Korea. Nevertheless, there are still more than ten other extant "Aegukgas" in South Korea.

In the 1890s, the previously established Joseon dynasty began to contact other countries for the first time, including the United States, United Kingdom, and Russia. The meeting with foreign countries gave rise to patriotism, which then created several "Aegugkas". For instance, works in 1896 includes "Aeguka" created by Na Pil-gun, Han Myung-one, and Lee Yong-mu. On November 21, 1896, scholars from the Paejae school sang a version of "Aegukga" in the independence door ceremony. However, this song differs from the song sung by the Military Academy in 1898 and from the songs sung on the birthday of the former emperor.

However, a book from the Korean Empire in 1900 has a record of a national anthem. It was called the "Korean Empire Aegukga", or literally the "Anthem of the Greater Korean Empire". The anthem is commonly believed to be written by Franz Eckert. Some people contend that records documenting Franz Eckert's actions show that it was physically impossible for him to write the anthem. It is guessed that the song sung by the Paejae school was the Scottish song "Auld Lang Syne" and that the song sung by the Military Academy is a version of the British song "God Save the Queen".

The song attributed to Eckert was established by the military in 1902. A version of Eckert's song with different lyrics began to be officially implemented in the schools in 1904. All the schools were forced to sing the version of the song. The policy is thought of as a by-product of the Japan–Korea Treaty of 1905 and the Japan–Korea Treaty of 1907.

There are many theories concerning the composer of the currently official version of "Aegukga". It is most commonly believed that the lyrics of the song were written for the cornerstone-laying ceremony of the Independence Gate in Seoul in 1896 by Yun Chi-ho, a Korean politician. Other theories name the composer as An Chang-ho, Choi Byung-hun, Kim In-sik, Min Yeong-hwan, or some combination of the aforementioned composers. The "Committee to search for the composer of 'Aegukga'" was established in 1955 by the government on the request of the United States, but the committee concluded that there was not enough evidence to name a composer. Initially, "Aegukga" was sung to the tune of the Scottish folk song "Auld Lang Syne", introduced to Korea by Western missionaries. The Provisional Government of the Republic of Korea (1919–1945) in Shanghai, China adopted it as their national anthem. At a ceremony celebrating the founding of South Korea on 15 August 1948, the Scottish tune was finally replaced by the Finale of "Korea Fantasia", which Ahn Eak-tai had composed in 1935. The new "Aegukga" was later adopted by the Presidential Decree of 1948 by the then South Korean President Syngman Rhee (or Lee Seungman).

Since the composer Ahn Eak-tai died in 1965, the copyright for the music was to not expire until at least 2036. Two South Korean professional football clubs were sued by a copyright holders' group for playing this song in December 2003. However, on March 16, 2005, the composer's widow—Lolita Ahn—and her family relinquished all rights to "Aegukga" to the South Korean government. The lyrics are now in the public domain.

If you are hosting a sports event, kindly contact me if you need anthems: keithterrett@gmail.com