Sign in / Register
HomeInstrumentationsQuintetThat’s A Plenty for Saxophone Ensemble

That’s A Plenty for Saxophone Ensemble

By: Lew Pollack (1895-1946) Arranged by Keith Terrett
For: Quintet of Woodwinds
This music is in your basket
View basket
Loading... 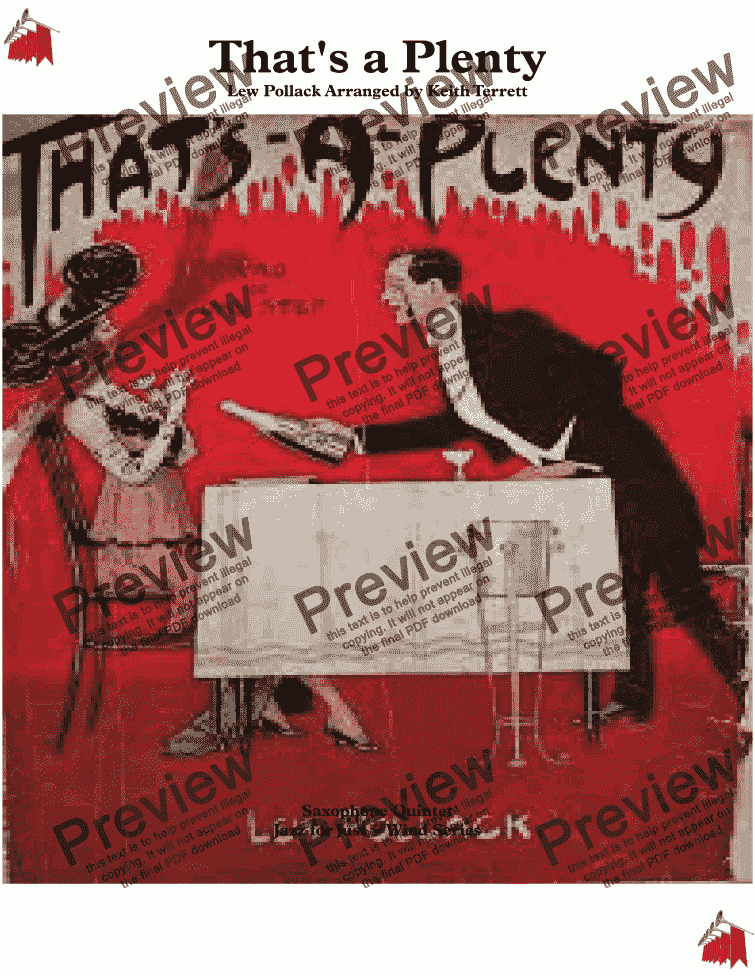 That’s A Plenty for Saxophone Ensemble

Composer
Lew Pollack (1895-1946) Arranged by Keith Terrett
Year of composition
1914
Arranger
Keith Terrett
Year of arrangement
2015
Publisher
Music for all Occasions
Difficulty
Moderate (Grades 4-6)
Duration
2 minutes
Genre
Jazz music
License details
For anything not permitted by the above licence then you should contact the publisher first to obtain permission.

An arrangement of That's a Plenty for Saxophone Ensemble.

Pollack was born in New York. Among his best-known songs are "Charmaine" and "Diane" with Ernö Rapée, "Miss Annabelle Lee", "Two Cigarettes in the Dark", "At the Codfish Ball" (featured in the Shirley Temple movie "Captain January" with Buddy Ebsen, and later the title of a Mad Men television episode), and Go In and Out The Window, now a children's music standard. He also collaborated with Paul Francis Webster, Sidney Clare, Ned Washington and Jack Yellen, amongst others. In 1914 he wrote "That's a Plenty", a rag that became an enduring Dixieland standard. He died in Hollywood.

That's a Plenty" is a 1914 ragtime piano piece composed by Lew Pollack. Lyrics by Ray Gilbert (born 1912) were added decades later. A number of popular vocal versions have been recorded, but the tune remains more performed as an instrumental.

The composition started out as a rag, but is nowadays played as a part of the Dixieland jazz repertoire. The song has been recorded by numerous artists, and it is considered a jazz standard. The first recording was in 1917 by Prince's Band, and the New Orleans Rhythm Kings recorded their rendition in 1923. Television comedian Jackie Gleason used it in his shows in the 1950s and 1960s.

Freddy Martin and His Orchestra recorded a version of "That's A Plenty" in 1950. Sheet music from the 1950 version featuring Freddy Martin on the cover has the lyrics printed inside.

Reviews of That’s A Plenty for Saxophone Ensemble