Hedonism for Trumpet and Orchestra

By: By Benjamin Sajo (2013)
For: Orchestra + solo Trumpet in Bb
This music is in your basket
View basket
Loading... 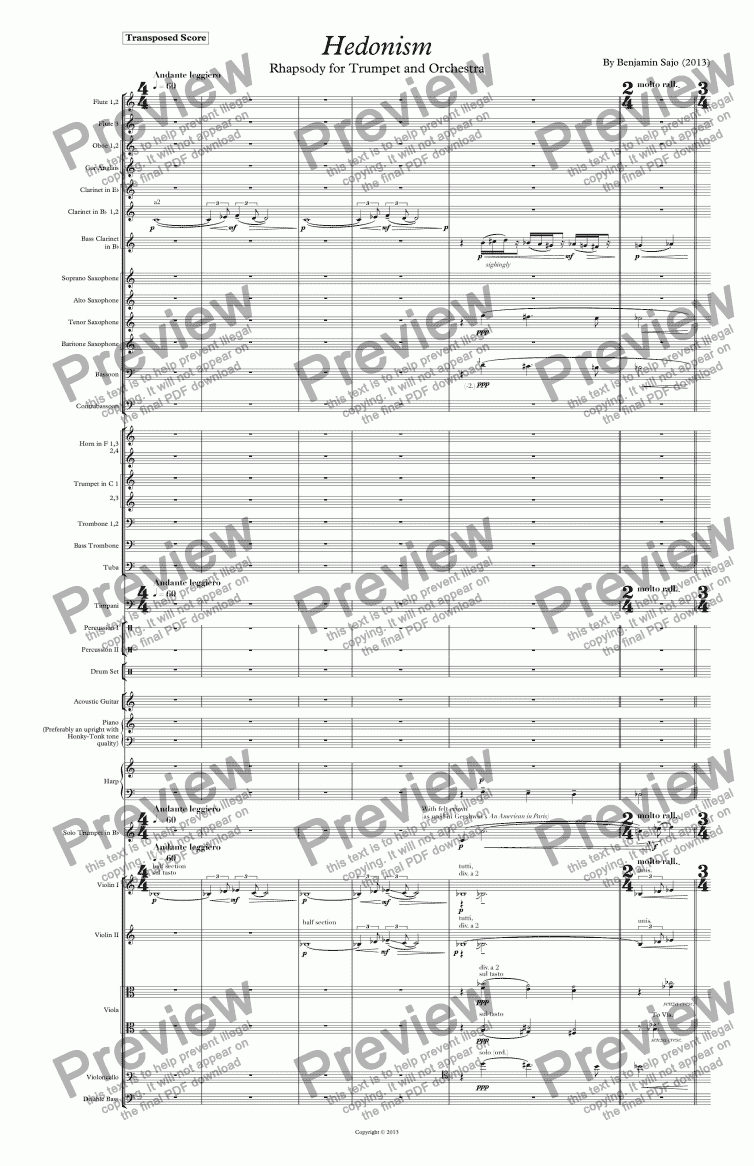 Hedonism for Trumpet and Orchestra

Composer
By Benjamin Sajo (2013)
Publisher
Benjamin Sajo
Difficulty
Difficult (Grades 7+)
Duration
12 minutes
Genre
Modern classical music
License details
For anything not permitted by the above licence then you should contact the publisher first to obtain permission.

Hedonism: Rhapsody for Trumpet and Orchestra is my second composition inspired by Toronto-based artist James Turner’s Map of Humanity. The map depicts the landscape of a world inspired by real and fictional geographical locations taken from literature and other historical mediums of both popular and fine art, organized within several regions of six continents named after aspects of human psychology—the continents of Abandonment, Hedonism, Abomination, Wisdom, Reason, and Fool’s Paradise. He writes: “Maps organize information. They pinpoint geographic locations relative to each other. The Map of Humanity […] organizes the locations on the basis of moral, emotional, and cultural significance. […]We have constructed a world made up of our own actions and beliefs, as much as the one formed by the land we live on. The map of humanity is formed by our thoughts, our feelings, our dreams, and our nightmares.”

The continent of Hedonism, depicted on the map, is inconspicuously phallic, and is situated beyond the straits of Hopelessness and Loss across from the continent of Abandonment, right beside the larger and mountainous continent of Abomination. In the land of Hedonism, a visitor may pass through the countries of Lust, Aimlessness, Greed, Gluttony, Envy, Lies, Treason and other zeitgeist locales. From the real world, Bankhok, Los Angeles, Sodom, and Xanadu are relocated here, and a tourist could spend hours meditating upon the map’s creative placement of disparate landmarks. On the bright side, to be a hedonist is to believe that the satisfaction of desire and earthly pleasure is the highest aim of human existence—“Eat, drink, and be merry, for tomorrow we die,” essentially. Detractors of the hedonistic life perceive only aimlessness, spiritual self-harm, and waste, whereas supporters shamelessly revel in the carpe diem sensuality and bubbling spontaneity by equating excessiveness in art to a great, rich, lush personal intensity. For the composition Hedonism, I decided to interpret this philosophy with the brute opposite of “less is more.” The scoring is massive and beyond neo-Romantic, heightened with a saxophone quartet, guitar, and drum set, (vibraphones come into play as well) imbedding a jazz big band in the orchestra. Generally, the composition’s chronology depicts, in the first portion of the piece, 1920s jazz influences, moving into the second portion’s obtuse swing influences, and the final portion’s more modern jazz elements—quartal harmonies, cool jazz colors. The big and bodacious influences —from the sexy to the grotesque—span a spectrum from Gershwin—especially Gershwin—Bernstein, Ellington, Weill, Mahler, Stravinsky, Berg, Ives, and Hollywood. Symbolically, there’s just as much Joyce and Kerouac to be found the pitches—“Blow as deep as you want to blow…Write what you want bottomless from bottom of the mind…Visionary tics shivering in the chest …In tranced fixation dreaming upon object before you…Remove literary, grammatical and syntactical inhibition.” Unlike the subdued yet passionate Abandonment for Trumpet and Orchestra, Hedonism is music from the opposite pole of austereness—bold, brash, libertine, and gushing. The solo trumpet’s role—amplified, preferably with a crackly lo-fi microphone—is the “star” of this rhapsody, but precludes a stable melodic leadership position, instead often precariously confrontational, dancing between clarity and confidence with long lyrical cadenzas (especially the final one: a bebop cadenza) to complete and overwhelming burial by the flanking masses. For a pseudo-concerto, this work is quite democratic because everybody in the orchestra carries something cool and complex to do. As a trumpet player myself, maybe this is my way to atone for my past egotistically eager desires to play over everybody else in rehearsals. Hedonism: Rhapsody for Trumpet and Orchestra is a party for everybody. From slow to fast, F. Scott Fitzgerald said it best: COME out . . . . out To this inevitable night of mine Oh you drinker of new wine, Here’s pageantry . . . . Here’s carnival, Rich dusk, dim streets and all The whispering of city night . . . .”

Reviews of Hedonism for Trumpet and Orchestra