By: Melody:John Francis Wade (1711-1786) Arr:Terrett
For: Brass trio
This music is in your basket
View basket
Loading... 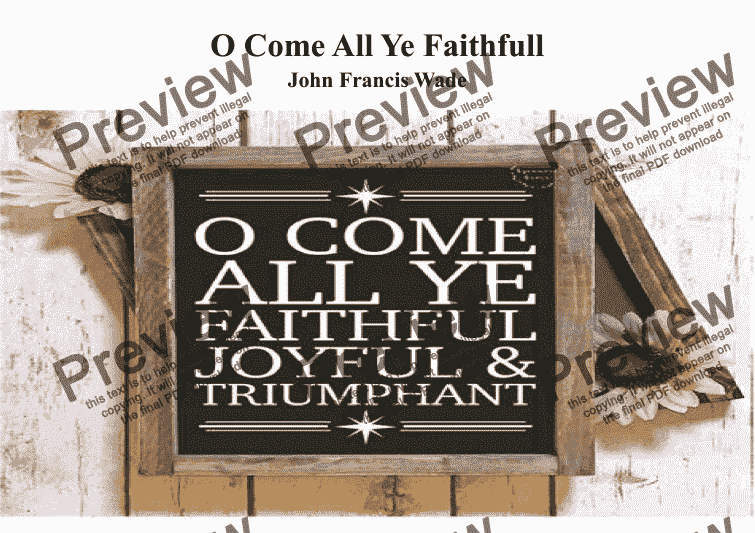 Composer
Melody:John Francis Wade (1711-1786) Arr:Terrett
Arranger
Keith Terrett
Publisher
Music for all Occasions
Difficulty
Easy (Grades 1-3)
Duration
1 minute
Genre
Other
License details
For anything not permitted by the above licence then you should contact the publisher first to obtain permission.

O Come, All Ye Faithful" (originally written in Latin as Adeste Fideles) is a Christmas carol which has been attributed to various authors, including John Francis Wade (1711–1786), with the earliest copies of the hymn all bearing his signature, John Reading (1645–1692) and King John IV of Portugal (1604–1656).

The original four verses of the hymn were extended to a total of eight, and these have been translated into many languages. The English translation of "O Come, All Ye Faithful" by the English Catholic priest Frederick Oakeley, written in 1841, is widespread in most English speaking countries. The present harmonisation is from the English Hymnal (1906).

Besides John Francis Wade, the tune has been purported to be written by several musicians, from John Reading and his son to Handel and even Gluck, including the Portuguese composers Marcos Portugal or the king John IV of Portugal himself. Thomas Arne, whom Wade knew, is another possible composer.[5] There are several similar musical themes written around that time, though it can be hard to determine whether these were written in imitation of the hymn, the hymn was based on them, or they are totally unconnected.

Wade included it in his own publication of Cantus Diversi (1751). It was published again in the 1760 edition of Evening Offices of the Church. It also appeared in Samuel Webbe’s An Essay on the Church Plain Chant (1782).

n this well-known and loved Christmas hymn, we are invited as God’s faithful people to go to Bethlehem and adore Christ the Lord (st. 1). We sing words borrowed from the Nicene Creed to express the Christian faith about the incarnation (st. 2). Then after exhorting the angels to sing their praise (st. 3), we greet Christ on his birthday (st. 4). The text has two unusual features for such a popular hymn: it is unrhymed and has an irregular meter.

John Francis Wade (b. England, c. 1711; d. Douay, France, 1786) is now generally recognized as both author and composer of this hymn, originally written in Latin in four stanzas. The earliest manuscript signed by Wade is dated about 1743. By the early nineteenth century, however, four additional stanzas had been added by other writers, A Roman Catholic, Wade apparently moved to France because of discrimination against Roman Catholics in eighteenth-century England–especially so after the Jacobite Rebellion of 1745. He taught music at an English college in Douay and hand copied and sold chant music for use in the chapels of wealthy families. Wade’s copied manuscripts were published as Cantus Diversi pro Dominicis et Festis per annum (1751).

The translation in the Psalter Hymnal is based primarily on the work of Frederick Oakeley (b. Shrewsbury, Worcester, England, 1802; d. Islington, London, England, 1880), who translated the text for use at the Margaret Street Chapel (now All Saints’, Margaret Street) in London (1841). It is also based on translations found in both F. H. Murray’s A Hymnal for Use in the English Church (1852) and William Mercer’s (PHH 35) Church Psalter and Hymn Book (1854).

Educated at Christ Church, Oxford, England, Oakeley was ordained in the Church of England in 1826. He served at Balliol College, Lichfield Cathedral, Whitehall, and Margaret Street Chapel in London. Influenced by the Oxford Movement, Oakeley and Richard Redhead (PHH 255), organist of Margaret Chapel, instituted "high" liturgies there, eliciting the charge of "Romanism." Oakeley also asserted in a pamphlet that; even though he would not "teach," he certainly should be allowed to "hold" all Roman Catholic doctrines. These views caused him to be suspended from his office. Rather than retract his statement, he joined the Roman Catholic Church in 1845 and associated himself with John Henry Newman. Following his reordination in the Roman Catholic Church, Oakeley worked among the poor in the Westminster area of London. In his writings he defended the Roman theology and practices of worship. He also wrote four volumes of verse as well as Historical Notes on the Tractarian Movement (1865).

As to the authorship and actual date of this hymn nothing positive is known. It has been ascribed to St. Bonaventura, but is found in no edition of his Works. Most probably it is a hymn of the 17th or 18th century, and of French or German authorship. The text appears in three forms. The first is in 8 stanzas, the second, that in use in France, and the third the English use, both in Latin and English. The full text [is] from Thesaurus Animae Christianae, Mechlin, N.D. (where it is given as a second sequence for Christmas and said to be "Ex Graduali Cisterciensi"….

In the English and French centos there are various readings; but we need only note three-—st. v., 1. 1, Patris for “Parentis"; st. vii., 1. 1, Io for "hymnos "; and rarely, exultant, for "nunc hymnos"; st. viii., 1. 2, hodierno, for "hodiernâ:" and of these the second is probably the original text. The English cento is composed of st. i., ii., vii. and viii., and the French, generally of st. i., iii., v., vi., and, very rarely, st. iv. also. Towards the close of the last century it was sung both in England and in France at Benediction during Christmastide. As early as 1797 the hymn was sung at the Chapel of the Portuguese Embassy, of which Vincent Novello was organist, and the tune…at once became popular. In the Paroissien Complet, Paris, of which the "Approbation" is dated July, 28th, 1827, the hymn is given in both the English and French forms. At p. 583 it occurs as, "Hymne Qui se chante, dans plusieurs eglises de Paris pendant le temps de la Nativite;" this is the English form, with various readings, consisting of st. i., ii., vii., viii.; then follows, "Hymne pour le temps de Noel," the ordinary French version st. i., iii., v. and vi., and both also occur in A Collection of Psalms, Hymns, Anthems, &c, Washington, 1830. [William T. Brooke]