Fugue on B-a-c-h for Tuba Quintet

By: Johann Georg Albrechtsberger arr. Keith Terrett
For: Quintet of Tubas
This music is in your basket
View basket
Loading... 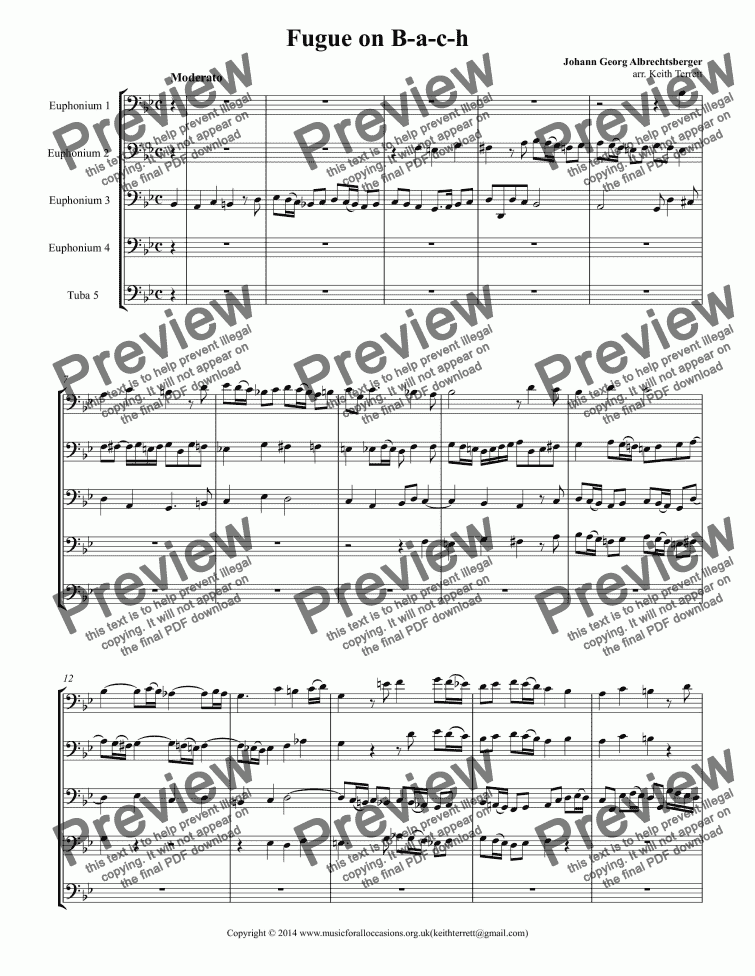 Fugue on B-a-c-h for Tuba Quintet

Composer
Johann Georg Albrechtsberger arr. Keith Terrett
Arranger
Keith Terrett
Publisher
Music for all Occasions
Difficulty
Moderate (Grades 4-6)
Duration
3 minutes
Genre
Classical music
License details
For anything not permitted by the above licence then you should contact the publisher first to obtain permission.

An arrangement of the fugue on BACH for Tuba Quintet.

Albrechtsberger was born at Klosterneuburg, near Vienna. He originally studied music at Melk Abbey and philosophy at a Benedictine seminary in Vienna and became one of the most learned and skillful contrapuntists of his age. Albrechtsberger's earliest classmates included Michael Haydn and Franz Joseph Aumann. After being employed as organist at Raab in 1755 and Maria Taferl in 1757, he was appointed Thurnermeister back at Melk Abbey. In 1772 he was appointed organist to the court of Vienna, and in 1792 Kapellmeister of St. Stephen's Cathedral.

His fame as a theorist attracted to him in the Austrian capital a large number of pupils, some of whom afterwards became eminent musicians. Among these were Johann Nepomuk Hummel, Ignaz Moscheles, Josef Weigl (1766–1846), Ludwig-Wilhelm Tepper de Ferguson (1768 – after 1824), Antonio Casimir Cartellieri, Ludwig van Beethoven, Anton Reicha and Franz Xaver Wolfgang Mozart. See: List of music students by teacher: A to B#Johann Georg Albrechtsberger. Beethoven had arrived in Vienna in 1792 to study with Joseph Haydn but quickly became infuriated when his work was not being given attention or corrected. Haydn recommended his friend Albrechtsberger, with whom Beethoven then studied harmony and counterpoint. On completion of his studies, the young student noted, "Patience, diligence, persistence, and sincerity will lead to success," which reflects upon Albrechtsberger's own compositional philosophies.

When Beethoven was finished studying with Albrechtsberger he decided to get a few more tips and pointers, so to speak, from Haydn. From there Beethoven possibly studied with Antonio Salieri, but this is unknown as a fact. It is also quite possible that Beethoven went off on his own to make a living, and only then returned after he had a stable career.

Albrechtsberger died in Vienna; his grave is in St. Marx cemetery.

His published compositions consist of preludes, fugues and sonatas for the piano and organ, string quartets, etc.; but the greater proportion of his works, vocal and instrumental, exists only in manuscript. They are in the library of the Vienna Gesellschaft der Musikfreunde. Around 1765, he wrote at least seven concerti for jaw harp and strings (three survive in the Hungarian National Library in Budapest). They are pleasant, well written works in the galant style. One of his most notable works is his concerto for Alto Trombone and Orchestra in B♭ Major. As the trombone has few works dating back to the classical period, his concerto is often highlighted by the trombone community. He also wrote a Concerto for the Mandola, Op. 27, written positively about in the 1914 book The Guitar and Mandolin.

Probably the most valuable service he rendered to music was in his theoretical works. In 1790 he published at Leipzig a treatise on composition, of which a third edition appeared in 1821. A collection of his writings on harmony, in three volumes, was published under the care of his pupil Ignaz von Seyfried (1776–1841) in 1826. An English version of this was published by Novello in 1855. His compositional style derives from Johann Joseph Fux's counterpoint, who was Kapellmeister at St Stephen's Cathedral 1713-1741, a position that Albrechtsberger would hold 52 years later.[citation needed]

A continuous thread can be traced from his teaching through that of his pupil Reicha, who went on to become the first Professor of Counterpoint and Fugue at the Paris Conservatoire from 1818 to his death in 1836, and who in turn reached a wide audience through both his own teaching and his theoretical writings, which were standard reference at the Conservatoire for most of the 19th century and translated into German by Czerny.

Reviews of Fugue on B-a-c-h for Tuba Quintet