By: Malcolm Dedman
For: Trio
This music is in your basket
View basket
Loading... 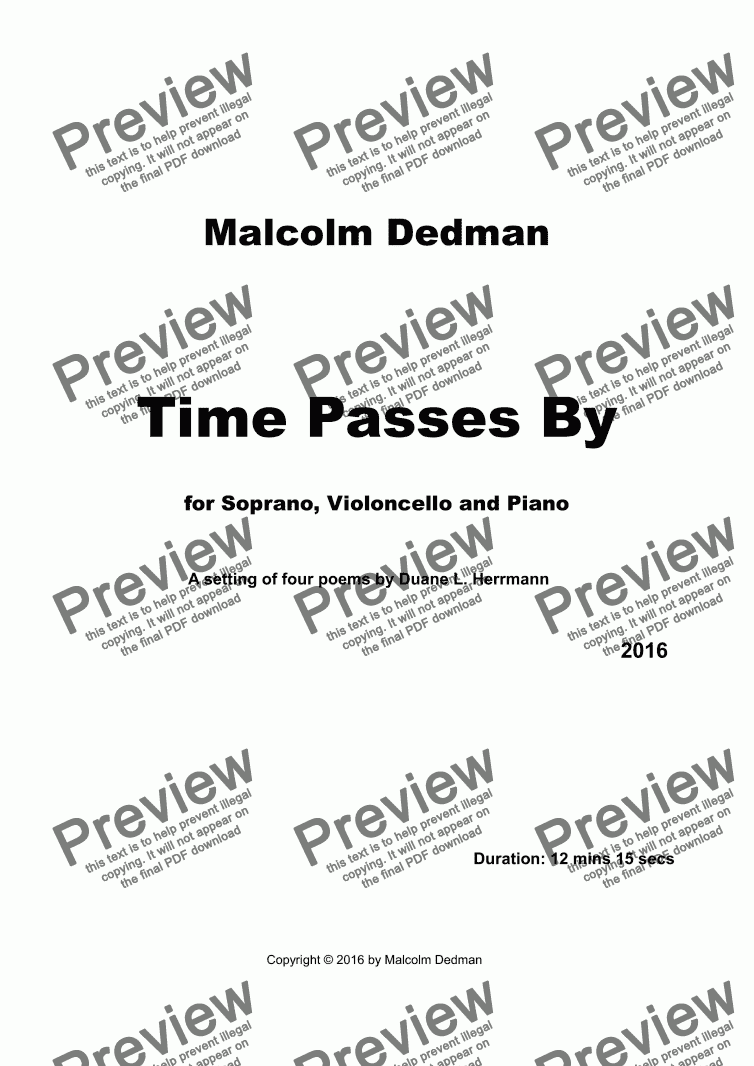 By: Malcolm Dedman
For: Trio

Time Passes By is a song cycle for soprano, cello and piano and was written in 2016. Its duration is approximately 12 minutes 15 seconds.

It is a setting of four poems by Duane L. Herrmann: ‘Flint Hills Farm’, ‘On the Central Plain’, ‘Lighted Window’ and ‘Dead Bridge by the Side of the Road’. Each poem describes a scene whereby something from the past has changed significantly over the passage of time.

‘Flint Hills Farm’ describes how a once busy farm is now desolate; weeds and grass now grow amongst the overgrown cedars; the deer return, but the poet observes that the wind is still howling through. The music dramatically describes this radical change.

‘On the Central Plain’ describes how a ‘once vast and mighty civilisation’ has collapsed and become a place for hiking, yet the memory of its being a holy place still remains. The musical setting is slow and simple.

‘Lighted Window’ describes how a home appears to be occupied, because a light has been left on, but no one lives there anymore. However, the light still appears to represent past occupants, whose life is over. The music seems to mock this window, as ‘this used to be your home’. The final retort is a definite ‘NO ONE lives here… anymore’.

Finally, ‘Dead Bridge by the Side of the Road’ describes a bridge that was once busy with activity but now ‘A skeleton of steel by the side of the road’. A new bridge was erected in its place, which the poet describes as ‘boring’, but it represents a world that has moved on. The contrast between what was and what is comes across in the music, and it becomes apparent that this concept runs through all these settings.

This song cycle was requested by the Macedonian cellist, Paskal Krapovski in 2015 after a concert of the composer’s music was given in Skopje in November of that year.

Journey of Life, Universal Mysteries, Living the Life, Images of Love, In Search of Beauty, Three Blackout Poems, O Ye Dwellers of the Highest Paradise, Should It Be!, O Son of the Supreme!, O Son of Being! and Awakening

Reviews of Time Passes By