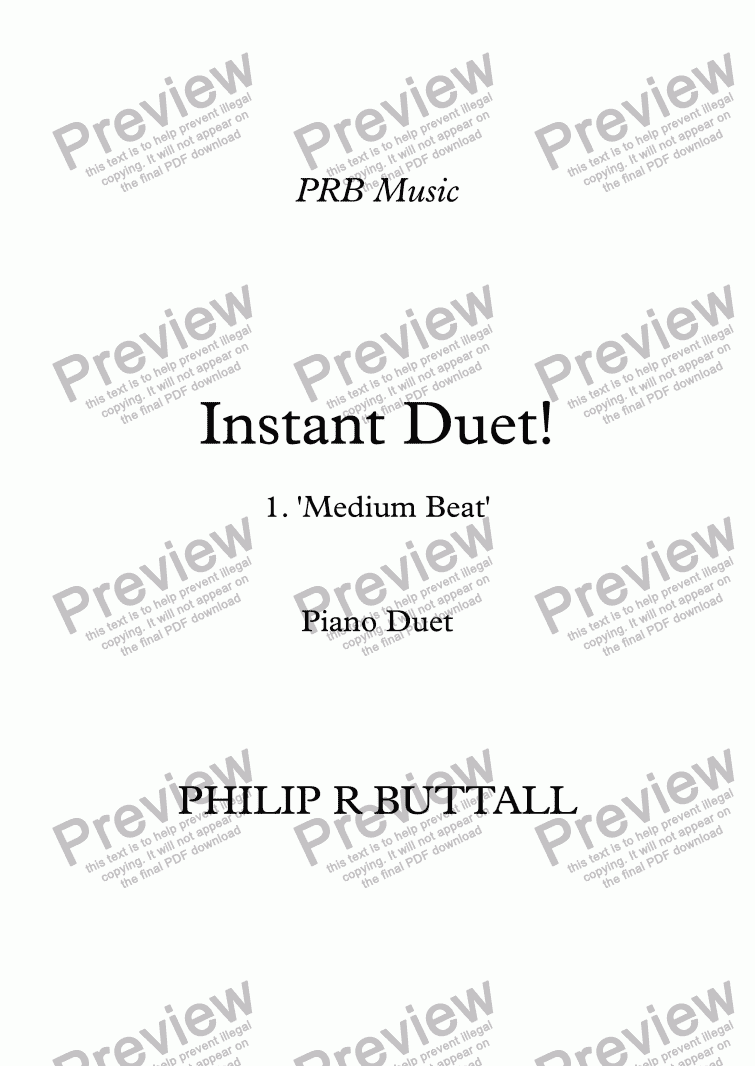 Composer
Philip R Buttall
Year of composition
2016
Publisher
PRB Music
Difficulty
Moderate (Grades 4-6)
Duration
2 minutes
Genre
Classical music
License details
For anything not permitted by the above licence then you should contact the publisher first to obtain permission.

Instant Duet! does exactly what it says on the tin! A child from a very young age can take part, whether they’ve ever played the piano before! The first-time results usually amaze the child, and their parents. The instructions are simple, too, and equally apply to any other pieces in the series:

1. Tell the child that they may use any BLACK notes they like - they’ll all fit! You’ll be playing at the ’secondo’ end of the keyboard, and they’ll be to the right (Primo). Tell them you’ll count to 8, and then the can start!

2. Initially they may be shy, but very soon, they grow in confidence, because of what you’re playing to support them harmonically, and which also gives them some rhythmic momentum. Most soon pick up on phrasings!

3. Some children will try to start with both hands, but for best results initially, suggest they use one hand only.

4. To get a good ’finish’, suggest they end on any F# / Gb - easily recognisable as the ’left of three black notes’. Children usually ’sense’ when to finish instinctively, though a little body language from the teacher can help, too! And having to feel comfortable in Gb major, is surely no big ask, for the pleasure it’ll give to the child!

The attached MP3 is the Sibelius replay, with a young student randomly playing ’over the top’. It might not sound it - especially as the playback has made the backing volume far louder than the student’s contribution - but it was good fun, and the student didn’t think was possible, given that they couldn’t actually play the piano!

The plan is to produce versions in other rhythms etc