By: Adriaan Valerius (1575-1625) Arr. by K.Terrett
For: Brass quintet
This music is in your basket
View basket
Loading... 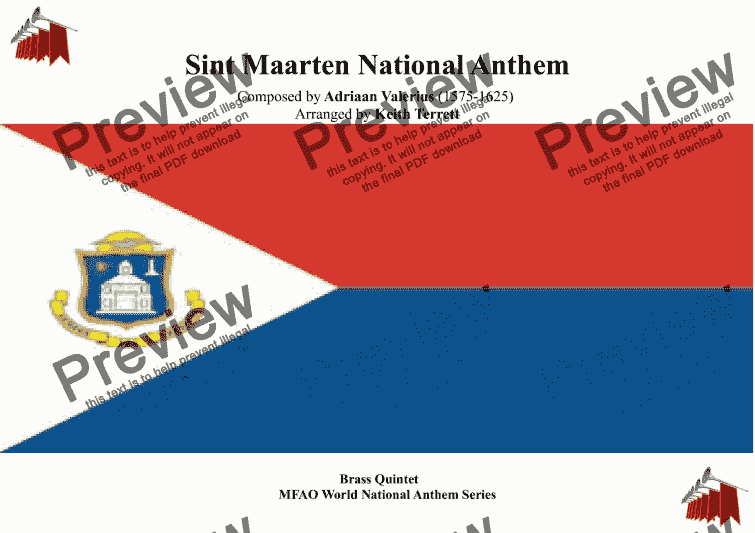 Composer
Adriaan Valerius (1575-1625) Arr. by K.Terrett
Arranger
Keith Terrett
Publisher
Music for all Occasions
Difficulty
Moderate (Grades 4-6)
Duration
1 minute
Genre
Classical music
License details
For anything not permitted by the above licence then you should contact the publisher first to obtain permission.

An arrangement of the Dutch anthem, the national anthem of Sint Maarten arranged for Brass Quintet.The Dutch national anthem is one of the oldest anthems in existence, the melody was known from before 1572 as a French Huguenot melody titled “Charles”, and the song first appeared in 1626 in a collection of songs assembled by Adriaan Valerius. Philips van Marnix van Sint Aldegonde is widely credited as the author, but as this is very much in dispute, the author is at this point basically unknown. It was not approved as the official national anthem until 1932.

“Het Wilhelmus” has 15 eight-line verses (the first verse, and sometimes the sixth, is most commonly performed). Based on older songs, the Wilhelmus takes the form of an acrostic on the name of William of Orange, the leader of the Dutch revolt against Philip II of Spain.

The song’s style resembles that of the work of the Rederijkers (“rhetoricians”), sixteenth-century companies of poets. For example, the first letters of the 15 verses spell the name “Willem van Nassov” (in the original orthography, the modern Dutch version has the acrostic spell “Willem van Nazzov”). The text is also thematically symmetrical, in that verses one and 15 resemble on another in meaning, as do verses two and 14, three and 13, etc., until they converge in the eighth verse, the heart of the song: “Oh David, thou soughtest shelter / From King Saul’s tyranny”. The words of the song also highly resemble the poems in the biblical book of Psalms. (The English versification to the right is meant to preserve not only the rhyming scheme and rhythm so that it can be sung to the melody, but also the symmetry of the verses and the acrostic.)

Another fact about the anthem that is often in dispute is the use of the word “Duitsen” in the second line of the first verse. Often translated as “German”, William’s birthplace indeed lies in modern-day Germany, however, Germany as a nation would not exist for another 300 years (the area still being known as the “Holy Roman Empire”). Only in modern Dutch has “Duits” come to mean “German” in all uses. Others have interpreted the word to mean “of the people”, which of course makes it more inclusive of the Dutch people. This site prefers “Germanic” as the translation; the original lyrics read “van Duytschen bloet”, “Duytschen” referring not to Germany (as it has been established that there was no such nation at the time), but to the lowlands area, which includes the modern-day Netherlands and certain areas of Germany, including where William of Orange was born; the word therefore highlighted William’s local origins. “Germanic” may be the best modern word to cover the original intent and area inferred.

O Sweet Saint Martin's Land is the bi-national song of Saint Martin/Sint-Maarten island, an island divided between the French Republic and the Kingdom of the Netherlands.

This full original version was written by Gerard Kemps in 1958.