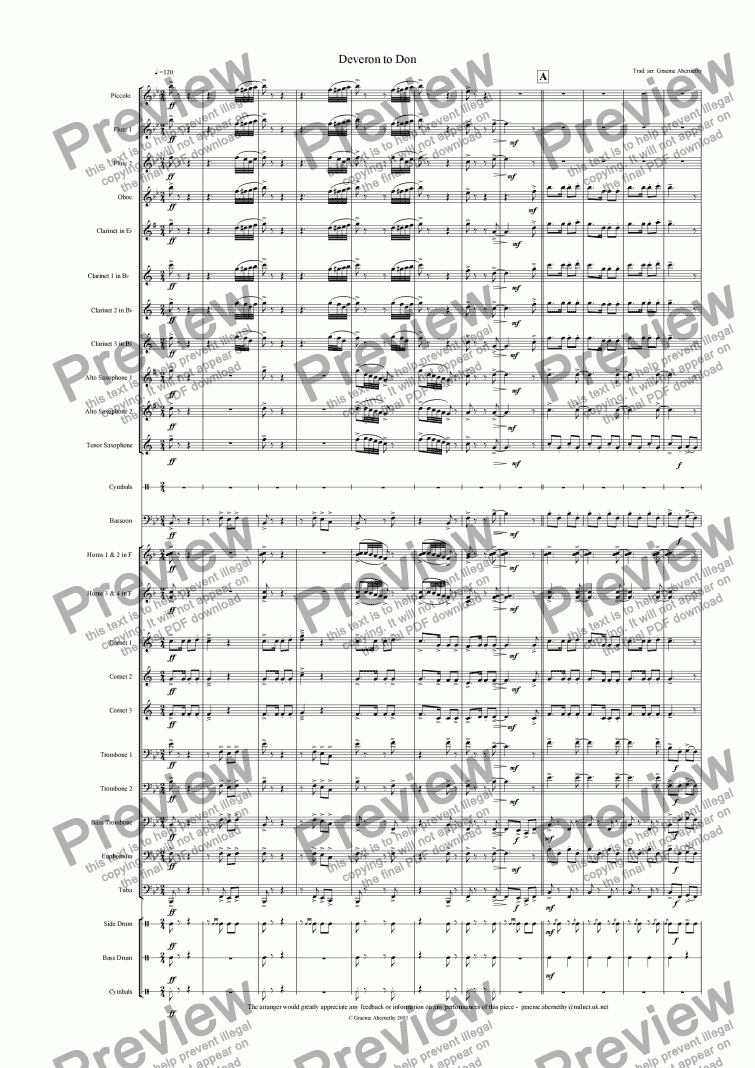 The Deveron and Don are two of the main rivers in north-east Scotland and the piece, in march form, is based on three well-known folk tunes from the area. The first, �The Bonnie Lass o� Fyvie� deals with the misfortune of an Irish Dragoon officer who falls in love with the eponymous lass and dies of a broken heart after being called away on duty. This is followed by the tune �O gin I were where Gadie rins�, a song extolling the beauties of the countryside around the mountain of Bennachie. The piece ends with �The Barnyards o� Delgaty� a ballad concerning a young farmhand who having put himself up for hire at market, finds himself landed with a very bad deal indeed.

During performance, tempo should not be allowed to rush as the trombones and euphoniums will have severe problems at letters C and D. Then again, the sight of incredibly frantic slide movement can provide entertainment in itself! For outdoor or marching purposes the existing piccolo part can be dropped and the two flute parts played on two piccolos. Neither the oboe or bassoon parts are crucial to performance.

The piece was first played in public by the bands of 51 Highland Brigade and the Ceremonial Guard of Canada at a concert on the Grand Parade, Halifax, Nova Scotia on the 5th July 2003. Score and parts available from:-

In order to submit this score to ScoreExchange.com Graeme Abernethy has declared that they own the copyright to this work in its entirety or that they have been granted permission from the copyright holder to use their work. If you believe that this score should be not available here because it infringes your or someone elses copyright, please report this score using the copyright abuse form.

Reviews of Deveron to Don