By: Composed by Chorale Melodia (Chorus of girls) Arranged by Keith Terrett
For: Brass quintet
This music is in your basket
View basket
Loading... 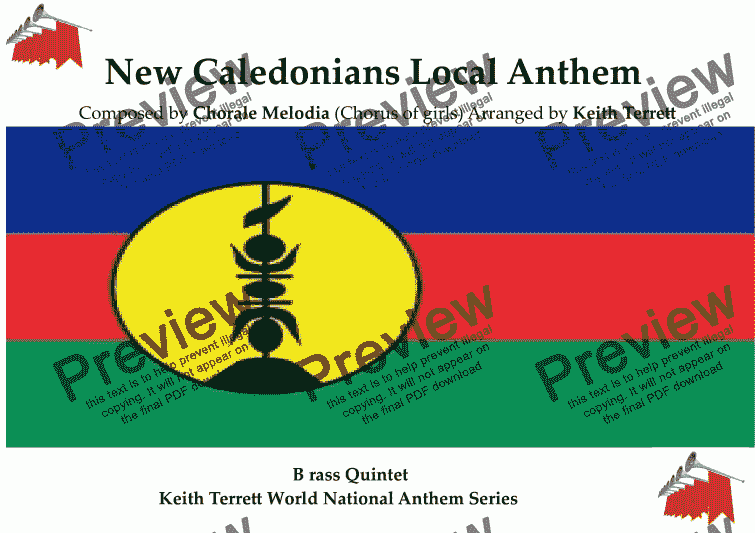 By: Composed by Chorale Melodia (Chorus of girls) Arranged by Keith Terrett
For: Brass quintet

Composer
Composed by Chorale Melodia (Chorus of girls) Arranged by Keith Terrett
Arranger
Keith Terrett
Publisher
Music for all Occasions
Difficulty
Moderate (Grades 4-6)
Duration
1 minute
Genre
World music
License details
For anything not permitted by the above licence then you should contact the publisher first to obtain permission.

The local anthem of New Caledonia arranged for brass quintet.

This French territory in the south Pacific has, over the years, been granted increasing autonomy in the French Republic. In early 2008, the local government started a contest for a local anthem. The anthem was written by seven members of a choral group called “Melodia”, comprised of 10 to 13 year old girls led by their director Philippe Millot (which possibly makes them the youngest anthem composers). The chorus is in Nengone, the language of the island of Maré (Loyauté) and then in French (the language of the rest of the anthem). Nengone was chosen by the group due to its ease of pronunciation. (The Nengone chorus was written by a local Nengone singer, Edouard “Gulaan” Wamedjo. It is unclear whether the Nengone lyrics have the same meaning as the French lyrics, although they seem to be at least similar.)

While the full version of the anthem consists of all three verses, a shorter version is made from only the third verse and the refrains.

Despite having a local anthem, the official anthem remains the French “La Marseillaise”, which is performed before the local anthem at all local events.﻿