By: Dr. J.A. George Irish Arranged by Keith Terrett
For: Brass quintet
This music is in your basket
View basket
Loading... 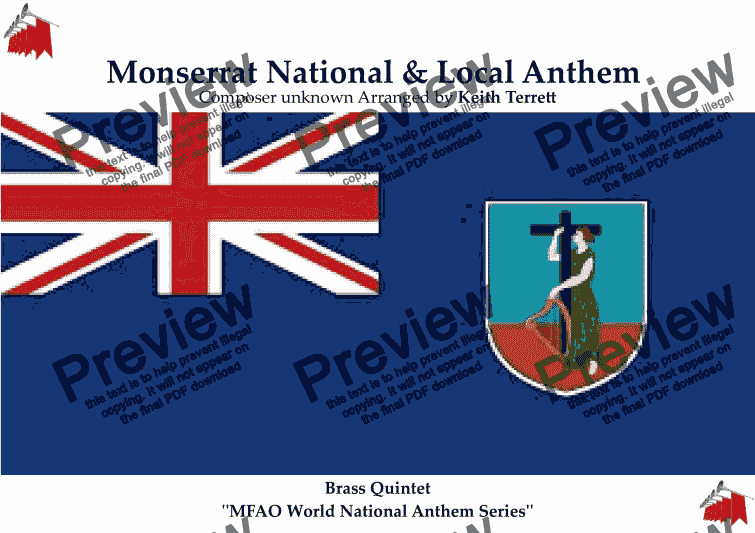 Composer
Dr. J.A. George Irish Arranged by Keith Terrett
Arranger
Keith Terrett
Publisher
Music for all Occasions
Difficulty
Easy (Grades 1-3)
Duration
2 minutes
Genre
World music
License details
For anything not permitted by the above licence then you should contact the publisher first to obtain permission.

Arranged for Brass Quintet, The Montserrat National Song is "Motherland", written by J.A. George Irish and former acting Governor of Montserrat, Sir Howard A. Fergus. "Motherland" was officially passed into law by the Legislative Assembly of Montserrat as the Territorial Song of Montserrat in 2014, after an extensive public search for a national song through open participation by Montserratians at home and abroad.

The composers are: J A George Irish (music) and Howard A. Fergus (lyrics), the first two recipients of the island's historic national award of the Order of Excellence, the highest honor granted to living citizens for their distinguished careers in education and community leadership.The official rendition submitted to the government for its archives and public usage is performed by international artist, Ayanna Irish.

The original version of this song was written as an unofficial "nationalist anthem" entitled, "Oh Emerald Isle" to express a nascent cultural pride that emerged in the early 1970s as part of an educational and cultural revival in Montserrat under the leadership of the young academic, Dr. J. A. George Irish, in his role as the academic and administrative Head of the newly established local Extra-Mural Branch of the University of the West Indies.