Eclogue for Flugelhorn (or Trumpet) & Organ

By: PHILIP R BUTTALL
For: Solo Flugelhorn + piano
This music is in your basket
View basket
Loading... 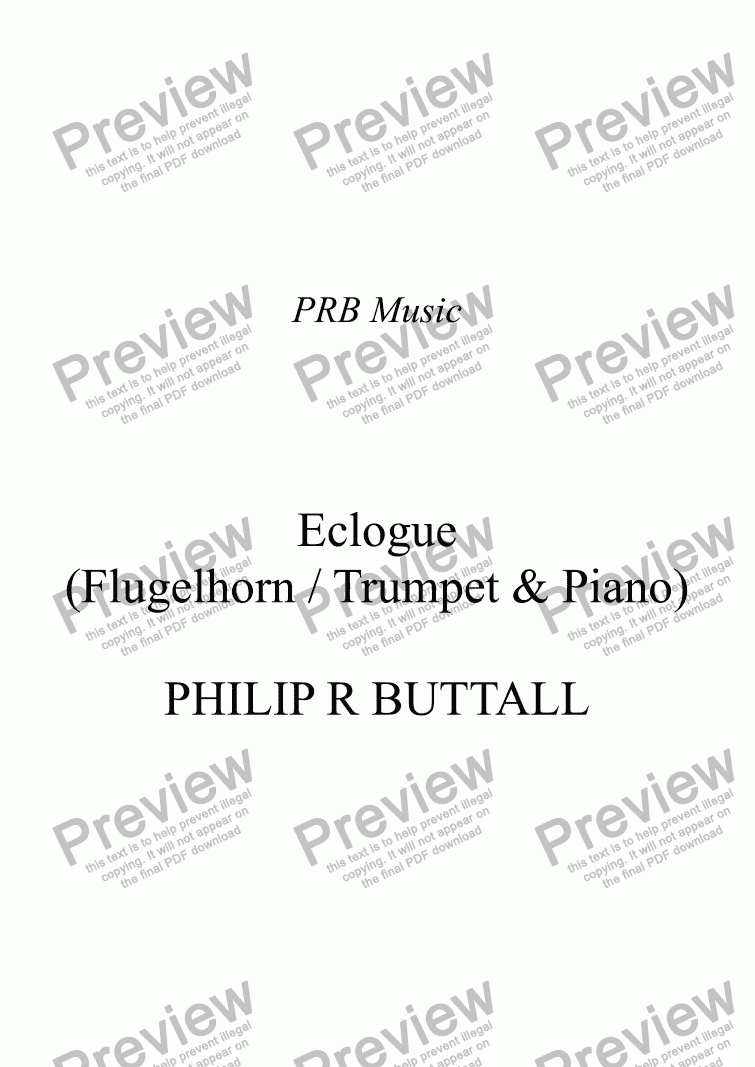 Eclogue for Flugelhorn (or Trumpet) & Organ

Composer
PHILIP R BUTTALL
Lyricist
none
Publisher
PRB Music
Difficulty
Difficult (Grades 7+)
Duration
4 minutes
Genre
Classical music
License details
For anything not permitted by the above licence then you should contact the publisher first to obtain permission.

Some years back, I was reviewing a recital in Plymouth’s Mother Church, featuring trumpet and organ. One of the pieces heard was in the nature of a slow meditation, which appealed a good deal, and I decided to try and compose something in a similar vein.

I have written it for Flugelhorn and Organ, as the rather more mellow tone of the instrument would better suit the somewhat ’devotional’ nature of the writing, I feel, although the trumpet would be a viable alternative. Equally a clarinet or other Bb instrument might just be substituted. There is an alternative version with piano accompaniment.

The piece was very recently given its Austrian premiere by my good friend, Elmar Eggerer, who played it during a Mass in St Stephen’s Cathedral, right in the heart of Vienna. He played it during the communion, and it went down very well, I’m pleased to say, receiving some positive comments from players in the Vienna Philharmonic, for example. On this occasion, Elmar used a 1960s Besson International Cornet.

The attached MP3 features a special version for soprillo (very small saxophone). It is played by Nigel Wood and the National Saxophone Choir - Nigel embellishes freely.

Reviews of Eclogue for Flugelhorn (or Trumpet) & Organ