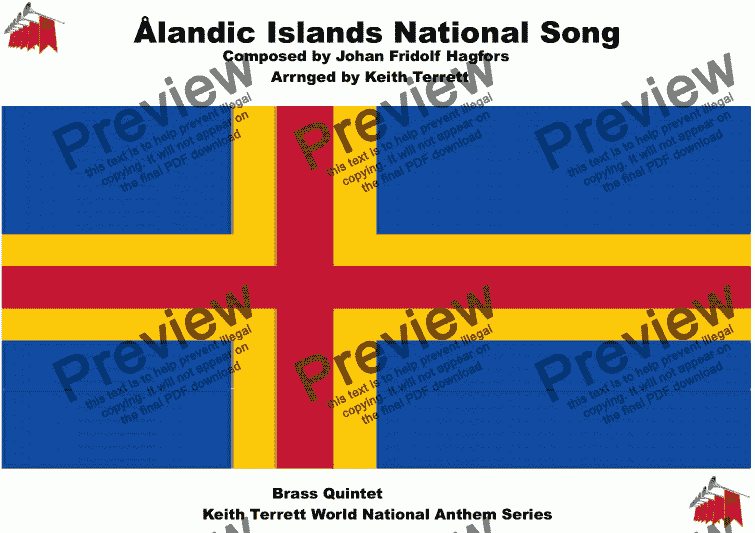 An arrangement of the Åland Islands National Song (Song of the Ålander - Ålänningens sång) for Brass Quintet.

Ålänningens sång (English: "Song of the Ålander"; Finnish: "Ahvenanmaalaisten laulu), is the official anthem of the Åland Islands, an autonomous Swedish-speaking province of Finland. Adopted in 1922, the anthem’s words are by John Grandell and the music was composed by Johan Fridolf Hagfors. The song was first performed during the song festival in Mariehamn 1922. In Åland the song is mostly sung on Midsummer’s Eve and on the National day of Åland in June 9th. The song originally had four verses, but the third verse is omitted for a long time when the song is sung and often when it appears in print.

Johan Fridolf Hagfors (11 March 1857–18 August 1931) was a Swedish newspaper publisher, music critic and composer, most known for having composed the two songs Modersmålets sång (The mother tongue’s song) and Ålänningens sång (Song of the Ålender).

Born in Orimattila, he got a Cand.phil degree in 1881. In 1883 he became publicist of the small Åbo paper Turun Lehti which was published in Finnish but at the same time Svecoman; it became the only newspaper with that combination to reach a wide readership. He also worked as a teacher in Åbo.

He composed several songs for male quartets. Modersmålets sång was first performed in 1989 and is today considered an unofficial hymn for the Swedish-speaking population of Finland. Ålänningens sång, for which he composed the melody, was first performed during the song festival in Mariehamn in 1922 and is today the regional hymn for the Åland islands.

In 1912 he became a member of the Royal Swedish Academy of Music.

Due to stiff competition, Turun Lehti ceased publication in 1919. Hagfors subsequently moved to Stockholm and obtained Swedish citizenship. He died in 1931. Fellow composer Erik August Hagfors was his half-brother. 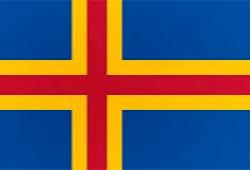