By: Composer Louis Hillier Arranged by Keith Terrett
For: Brass quintet
This music is in your basket
View basket
Loading... 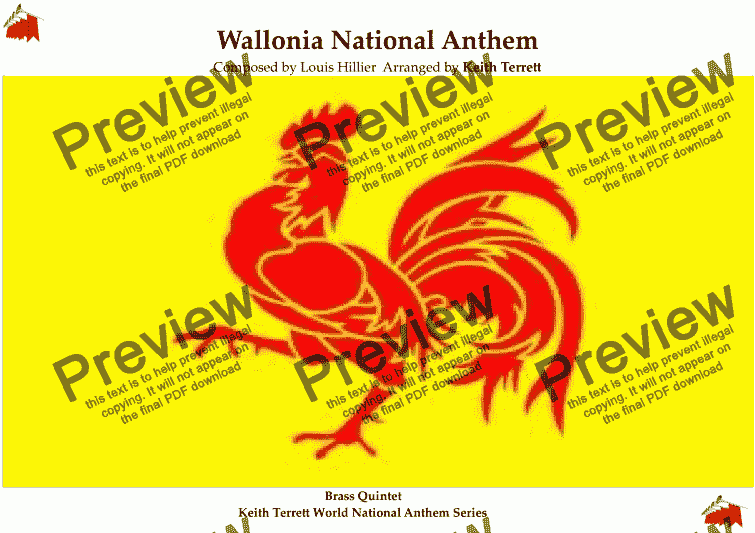 Composer
Composer Louis Hillier Arranged by Keith Terrett
Arranger
Keith Terrett
Publisher
Music for all Occasions
Difficulty
Moderate (Grades 4-6)
Duration
3 minutes
Genre
World music
License details
For anything not permitted by the above licence then you should contact the publisher first to obtain permission.

An arrangement of the regional anthem for Wallonia, arranged for classical Brass Quintet.

Le Chant des Wallons (The Song of the Walloons) is the anthem of Wallonia (Belgium).

The original words, written in Walloon as Li Tchant des Walons by Théophile Bovy in 1900, were in 1901 set to music composed by Louis Hillier. Performed for the first time in the city of Liège, the song quickly spread to other parts of French-speaking Belgium and established itself like a "national" anthem for Wallonia.

When, on 15 July 1998, the Walloon Parliament approved a law defining the official symbols of the Walloon Region (a flag, anthem, and holiday), it was a French version of Li Tchant des Walons that was chosen. However, the lyrics adopted on that occasion are not a direct translation of the original: the number and order of verses differ, and they diverge significantly from the original Walloon text in places.

Louis Hillier (1850–1910) was a Belgian musician and composer of Wallonia, who in 1901 wrote the music of the Le Chant des Wallons, the Walloon anthem.

Among his many other compositions, he was commissioned by The General Electric Company, Ltd. (GEC of the UK, not GE of the USA) to write a company March which was performed at their 1904 Annual Dinner. It incorporated a musical part written for electric bells, still new technology at the time.