By: James James (1833-1902) Arranged by Keith Terrett
For: Brass quintet
This music is in your basket
View basket
Loading... 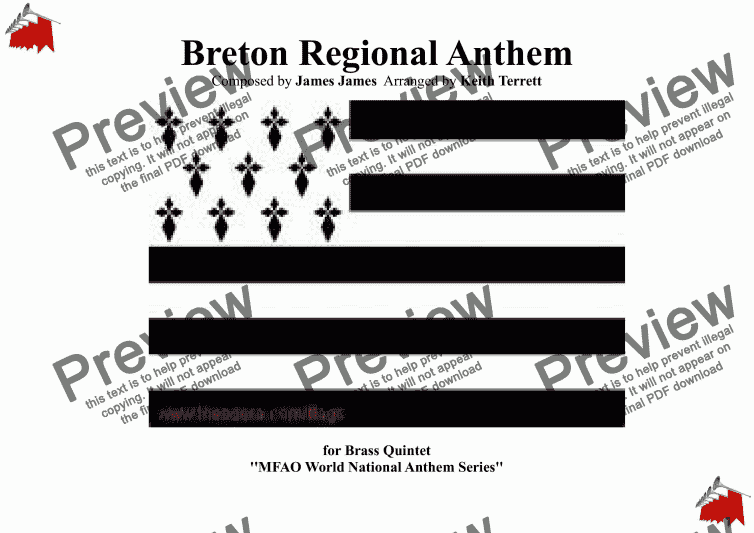 Composer
James James (1833-1902) Arranged by Keith Terrett
Arranger
Keith Terrett
Publisher
Music for all Occasions
Difficulty
Easy (Grades 1-3)
Duration
2 minutes
Genre
World music
License details
For anything not permitted by the above licence then you should contact the publisher first to obtain permission.

An arrangement of the regional anthem of Brittanny for Brass Quintet.

The Breton lyrics are the creation of François Jaffrennou in 1897, and the music was that composed by James James, of Pontypridd, Wales, for Hen Wlad Fy Nhadau. The new song was first published in 1898, and circulated as Henvelidigez ("Adaptation"). It was chosen as national anthem (and a song to celebrate friendship between the Welsh and Bretons) in 1903, at a Congress of the Union Régionaliste Bretonne held in Lesneven. Maurice Duhamel adapted it for the piano, and it was first recorded by Pathé in 1910.

James James (also known by the bardic name Iago ap Ieuan) (1833–1902) was a harpist and musician from Pontypridd, Wales. He composed the tune of the Welsh national anthem Hen Wlad fy Nhadau (also known as Land of my Fathers).

He was born on 4 November 1832, at the ’Ancient Druid’ inn, Hollybush, in the parish of Bedwellty, Monmouthshire. He was the son of Evan James (1809-1878) and Elizabeth Stradling of Caerphilly. His father, a Welsh versifier under the pen-name of leuan ab lago, moved with his family about 1844 to Pontypridd, where he carried on the business of weaver and wool merchant. His son James assisted him in the business.

James James composed the melody which was later known as Hen Wlad fy Nhadau in January 1856. At first it was known as Glan Rhondda (The banks of the Rhondda), and gave rise to the tradition that the tune had come to him as he walked on the bank of the River Rhondda. His father, Evan James, wrote the lyrics that eventually became the words of the Welsh national anthem.

A memorial to James James and his father, in the shape of two figures representing the muses of Poetry and Music, stands in Ynysangharad Park, Pontypridd. James James died in Aberdare in the Cynon Valley 11 January 1902,[3] he is buried in the local cemetery at Aberdare in the same grave as his wife Cecilia and daughter Louisa.