By: Composed by Ludvig Van Beethoven arranged by Keith Terrett
For: Brass quintet
This music is in your basket
View basket
Loading... 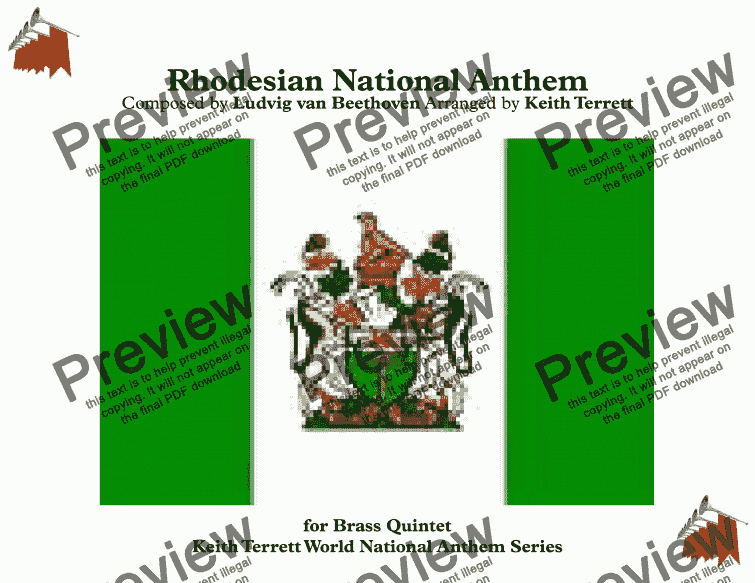 By: Composed by Ludvig Van Beethoven arranged by Keith Terrett
For: Brass quintet

Composer
Composed by Ludvig Van Beethoven arranged by Keith Terrett
Arranger
Keith Terrett
Publisher
Music for all Occasions
Difficulty
Easy (Grades 1-3)
Duration
1 minute
Genre
Classical music
License details
For anything not permitted by the above licence then you should contact the publisher first to obtain permission.

An arrangement of the old Rhodesian National Anthem for classical Brass Quintet.

When Rhodesia first declared its independence in 1965, it was a member of the British Commonwealth, and retained the Queen as the head of state, therefore “God Save the Queen” was the national anthem until Rhodesia became a republic in 1970, and ties were severed with the United Kingdom. Rhodesia then did not have a national anthem until a national competition was held and Mary Bloom’s “Voices of Rhodesia” was declared as the anthem on 26th August 1974. (The title soon became popularly known as the entire first line of the lyrics). Using Beethoven’s “Ode to Joy” (which was also used at the time as the anthem of the European Union, and still is today) as the melody, the lyrics were composed by a South African born resident of Gwelo.

Use of an anthem that had the same tune as the European anthem, and a well-known classical work, has caused problems in both Rhodesia (later Zimbabwe) and Europe as well. During the period from 1970 to 1979, when ties between the Rhodesian and British governments were severed; at European Union events, hearing an anthem that was also associated with Rhodesia led for some uncomfortable moments for British delegations. Rhodesia’s choice of the anthem was accepted by the European Union, as the basic piece was in the public domain, and Rhodesia had used a different arrangement. After Rhodesia was transitioned to a majority-rule country and renamed Zimbabwe, the performance of the Beethoven work inside Zimbabwe has been met with derision, due to its association with the Rhodesian government.

In June of 1979, the white majority rule was ended and the country was renamed Zimbabwe-Rhodesia. I am unsure whether this anthem was used in Zimbabwe-Rhodesia as the sole national anthem, if it was a part of the anthem (perhaps combined with “God Bless Africa”, similar to what is currently being done in South Africa), or if it was not used at all. Control of Zimbabwe-Rhodesia was returned to British rule starting in December 1979 when the name Southern Rhodesia was assumed, and God Save the Queen was again the national anthem until full international recognition was achieved as Zimbabwe in April 1980.