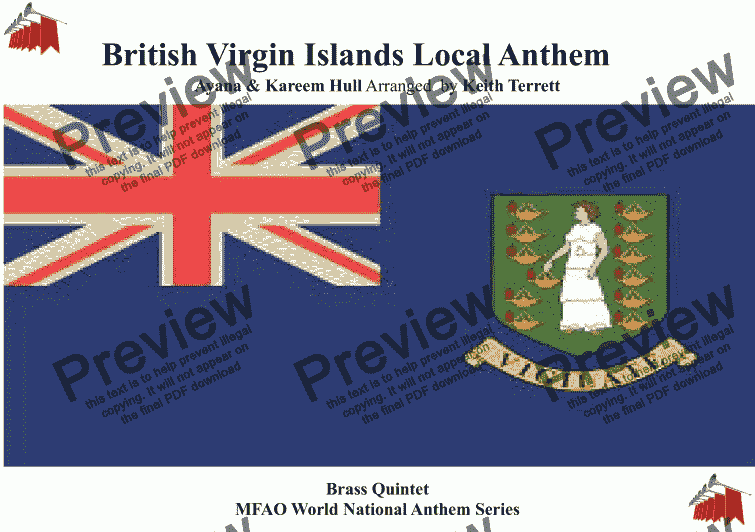 An arrangement of the British Virgin Islands local anthem for Brass Quintet.

In December, 2011, a competition was held to create a local anthem for the British Virgin Islands, being one of the very few British territories without a local anthem. The song was to address “who we are as a people” according to the Minister of Education and Culture.

The three finalists were presented and voted upon by the public on June 10, 2012, and the winning entry, written by the brother and sister team of Ayana and Kareem Hull was passed as the local anthem on September 3 of that year. The British “God Save the Queen” remains the official national anthem as it is a British territory.

The composition was titled “Oh Beautiful Virgin Islands” when it was originally composed (and this is the name given it in the subsequent bill making it the national song), but it has frequently been performed as “Oh British Virgin Islands”.“God Save Our Gracious Queen" is the National Anthem of the UK and also in some British territories. In countries not previously part of the British Empire, the tune of "God Save The Queen" has provided the basis for various patriotic songs, though it is still generally connected with a royal ceremony. The first published version of “God Save Our Gracious Queen” appeared in 1744 in Thesaurus Musicus, in which that version of the song was popularised in Scotland and England the following year. The words and tune are anonymous, and may date back to the seventeenth century. It was recorded in London theatres in 1745. In general only one or two verses are sung, but on rare occasions three. In sports in which the British Virgin Islands compete, "God Save The Queen" is used to represent anyone or any team that comes from the United Kingdom. There is no definitive version of the lyrics. However, the version consisting of the three verses reproduced has the best claim to be regarded as the ’standard’ British version.