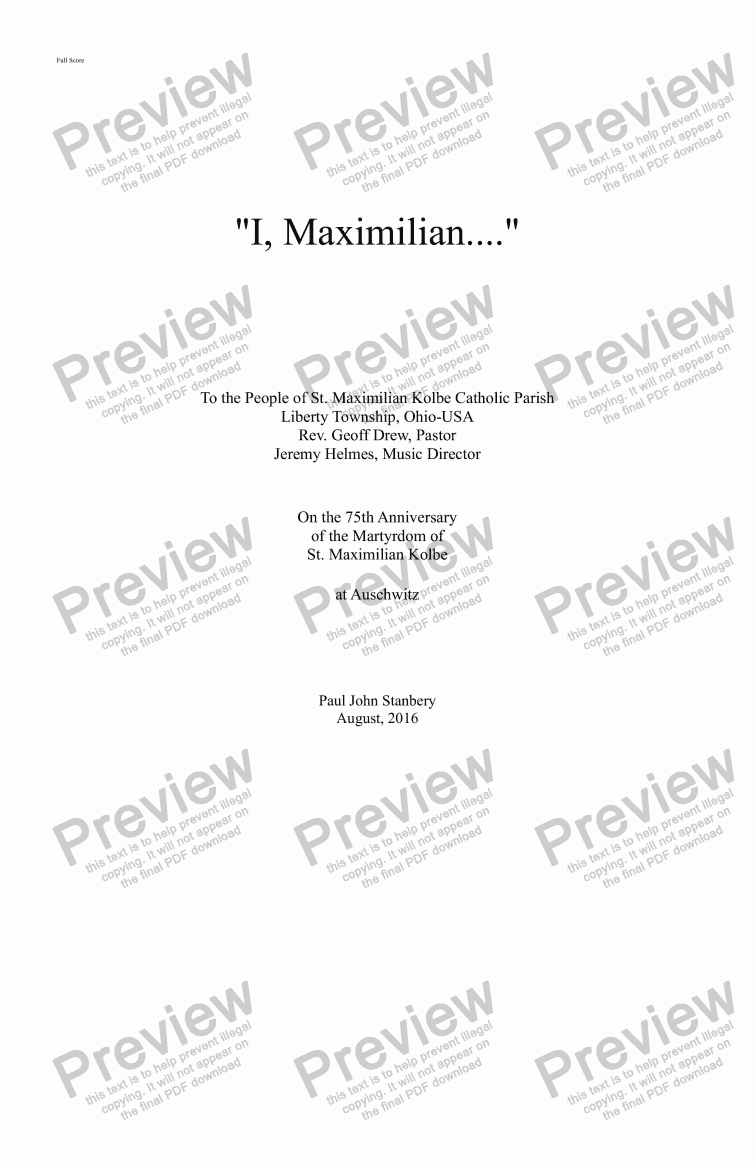 Price:
(+ VAT when applicable. Price is for score onlyPrice is for score and complete set of 29 parts)
Note: The publisher requires a minimum purchase of 1 licenses
Change currency...
You are purchasing high quality sheet music PDF files suitable for printing. You are purchasing a this music. Be sure to purchase the number of copies that you require, as the number of prints allowed is restricted.

August 14, 2016 marks the 75th anniversary of the martyrdom of St.Maximilian Kolbe at the Auschwitz, Poland Death Camp in 1941.

The piece "I Maximilian…." was written at the request of St. Maximilian Catholic Parish in Hamilton, in commemoration of that sad event. The premiere performance will take place in their church on October 29, 2016, with the Hamilton-Fairfield Symphony Orchestra. The composer is grateful for their pastor, the Rev. Geoff Drew and Jeremy Helmes for the opportunity.

It lasts about 18 minutes. The composition was completed on the 14th of August, the actual anniversary date.

It is scored for Tenor solo (dressed as Maximilian and semi staged); hand bell choir and symphony orchestra.

The text is adapted loosely from a poem by Jerzy Sito entitled "De Profundis Maximilian Kolbe (Prisoner 16670)". Added as well are the actual events and words spoken leading up to and including his death at the hands of the Nazi’s.

Fr. Kolbe gave his own life in place of another prisoner, a man with a wife and children, who was selected to be sent to the starvation bunker. "Take me, instead……" was his request, which the Nazi’s honored. While in the bunker, he sang hymns and prayed with the other victims. After about ten days, he was the last one still alive, and was injected with carbolic acid because his captors needed the space.

Fr. Maximilian Raymond Marija Kolbe had an enduring dedication to Mary, the "Immaculata", as the one person who came closest to the perfection of Christ on earth. It is also possible for the rest of us, since she did it. It permeated his life, and he was imprisoned after saving the lives of more than 1,000 Jews in one of his friaries. He also published a pamphlet which was considered "dangerous".

To illustrate all of this, there is a two-part passacaglia (repeated bass line notes) which acts as a sort of unending "death march", but in 3/4 time.

The composer has woven 4 other themes throughout, and the that same passacaglia occurs frequently, even as the um-pah of a grotesque German Band (for the Nazi’s).

3. Immaculate Mary (Maximilian’s hymn of choice-he sang it in the prison and starvation bunker).

4. The Horst Wessel Song for the Nazi's. The Third Reich adopted this as their theme. This appears as a grotesque German Band sound, with side drum. The oompah tuba part pitches are actually the same notes as the mournful passacaglia, death march.

Just before the Nazi theme takes over, and before the tenor solo enters (Maximilian), there is a hint of the famous bell tower and trumpet call of Wawel Cathedral in Krakow. Auschwitz is not far……

The tenor quotes from the "Ave Maria" of Jacques Arcadelt, which surely would have been a familiar tune to Fr. Kolbe.

In order to submit this score to ScoreExchange.com Paul Stanbery has declared that they own the copyright to this work in its entirety or that they have been granted permission from the copyright holder to use their work. If you believe that this score should be not available here because it infringes your or someone elses copyright, please report this score using the copyright abuse form. 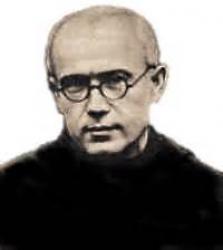