By: Traditional Arranged by Keith Terrett
For: Brass quintet
This music is in your basket
View basket
Loading... 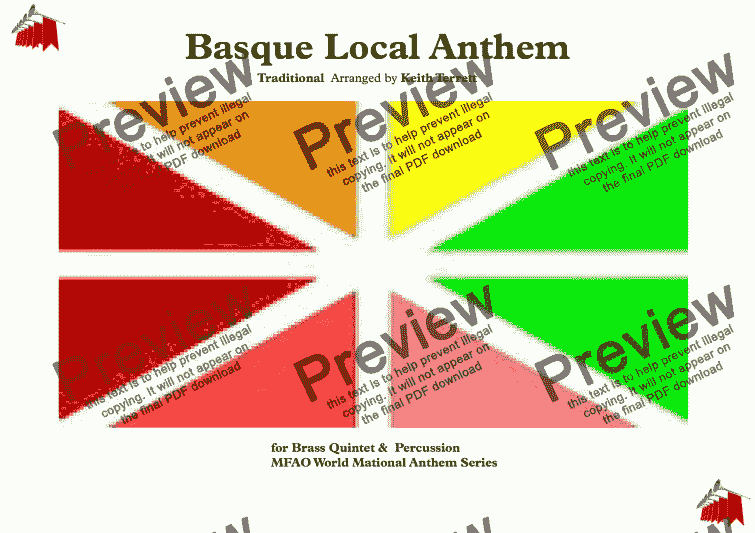 By: Traditional Arranged by Keith Terrett
For: Brass quintet

Composer
Traditional Arranged by Keith Terrett
Arranger
Keith Terrett
Publisher
Music for all Occasions
Difficulty
Moderate (Grades 4-6)
Duration
1 minute
Genre
World music
License details
For anything not permitted by the above licence then you should contact the publisher first to obtain permission.

An arrangement of the Basque Local Anthem for Brass Quintet & optional Percussion.

The anthem lyrics were written by Sabino de Arana y Goiri while he was in prison (May-November 1902). The text was created to be sung with the music of the old dance ezpata-dantza (dance of spades). A few years later, the Basque musician Cleto Zabala arranged the music. In 1905 the Basque National Party declared the anthem as the Basque National Anthem. The first Basque Government created during the Spanish war (1936-1939) approved it officialy as Anthem (music and lyrics).

After 1939 with the fascist dictatorship in Spain the anthem was forbidden. In 1983, several years after the end of dictatorship and when the Basque Autonomy was re-established, the Basque Parliament approved the anthem, but only the music without the lyrics so the anthem would not be seen as tied to one particular political party or overly religious in nature.