By: Traditional English Folk Song
For: Brass quintet
This music is in your basket
View basket
Loading... 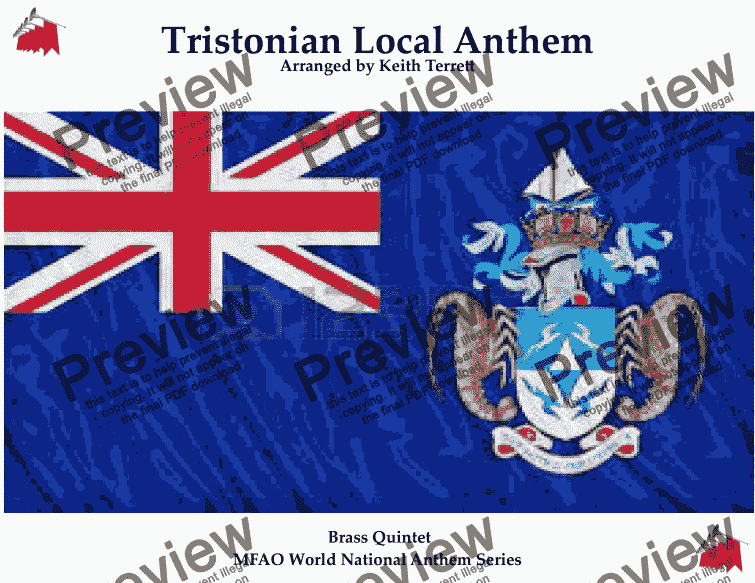 Composer
Traditional English Folk Song
Year of composition
1776
Arranger
Keith Terrett
Year of arrangement
2016
Publisher
Music for all Occasions
Difficulty
Easy (Grades 1-3)
Duration
1 minute
Genre
Classical music
License details
For anything not permitted by the above licence then you should contact the publisher first to obtain permission.

An arrangement of the national song of Tristan da Cunha arranged for Brass Quintet.

The Cutty Wren and its variants like The Hunting of the Wren are traditional English folk songs. The origins and meaning of the song are disputed. It is thought by some to represent the human sacrifice of the Year King, or the symbolic substitute slaughter of the wren as "king of the birds" at the end of the year for similar purposes, and such songs are traditionally sung on Boxing Day (26 December), just after the winter solstice. 26 December is sometimes called: "St. Stephen's Day" or "Wren Day". These rituals are discussed in The Golden Bough. It is number 236 in the Roud Folk Song Index.

Tristan da Cunha (pronunciation: /ˈtrɪstən də ˈkuːnjə/), colloquially Tristan, is the name of both a remote group of volcanic islands in the south Atlantic Ocean and the main island of that group. It is the most remote inhabited archipelago in the world, lying 2,000 kilometres (1,200 mi) from the nearest inhabited land, Saint Helena,[ and 2,400 kilometres (1,500 mi) from the nearest continental land, South Africa. It is 3,360 kilometres (2,090 mi) from South America. The territory consists of the main island, named Tristan da Cunha, which has a north–south length of 11.27 kilometres (7.00 mi) and an area of 98 square kilometres (38 sq mi), along with the smaller, uninhabited Nightingale Islands and the wildlife reserves of Inaccessible and Gough islands. As of September 2016, the main island has 265 permanent inhabitants. Meanwhile, the other islands are uninhabited, except for the personnel of a weather station on Gough Island.