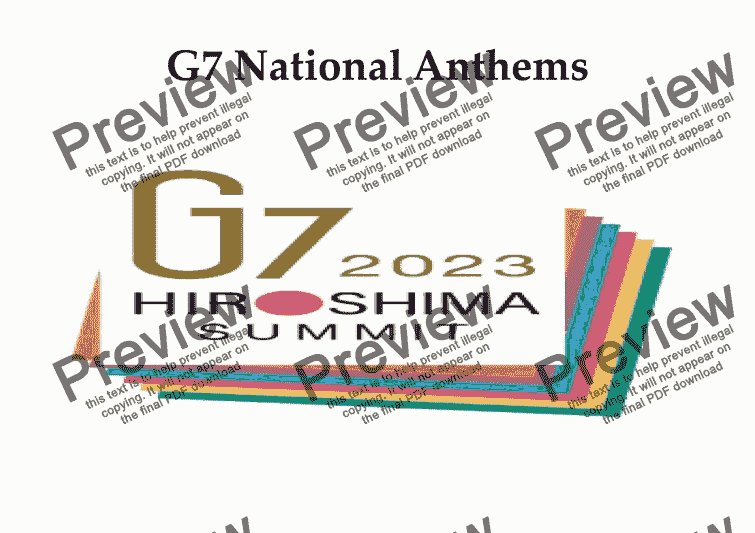 An arrangement of the G8 national anthems for Brass Quintet.The G8 (G7 due to Russia’s suspension) is a governmental political forum. The forum originated with a 1975 summit hosted by France that brought together representatives of six governments: France, the Federal Republic of Germany, Italy, Japan, the United Kingdom, and the United States, thus leading to the name Group of Six or G6. The summit became known as the Group of Seven or G7 in 1976 with the addition of Canada. Russia was added to the political forum from 1997, which then became known as the G8; Russia was, however, suspended in 2014 following the annexation of Crimea. The European Union has been represented within the G8 since the 1980s but originally could not host or chair summits. The 40th summit was the first time the European Union was able to host and chair a summit.

"G8" can refer to the member states in aggregate or to the annual summit meeting of the G8 heads of government. The former term, G6, is now frequently applied to the six most populous countries within the European Union. G8 ministers also meet throughout the year, such as the G7 finance ministers (who meet four times a year), G8 foreign ministers, or G8 environment ministers.

Collectively, in 2012 the G8 nations comprised 50.1 percent of 2012 global nominal GDP and 40.9 percent of global GDP (PPP). Each calendar year the responsibility of hosting the G8 is rotated through the member states in the following order: France, United States, United Kingdom, Russia, Germany, Japan, Italy, and Canada. The holder of the presidency sets the agenda, hosts the summit for that year, and determines which ministerial meetings will take place. Both France and the United Kingdom have expressed a desire to expand the group to include five developing countries, referred to as theOutreach Five (O5) or the Plus Five: Brazil (9th country in the world by nominal GDP People’s Republic of China (2nd country in the world by GDP India (7) th country in the world by nominal GDP), Mexico, and South Africa. These countries have participated as guests in meetings that are sometimes called G8+5.

With the G-20 major economies growing in stature since the 2008 Washington summit, world leaders from the group announced at their Pittsburgh summit on September 25, 2009, that the group would replace the G8 as the main economic council of wealthy nations.[8][9] The G7/G8 retains its role as a premier body for international security cooperation with the purpose of discussing global issues such as economic growth, crisis management, global security, energy, and terrorism.

On March 24, 2014, the original G7 nations voted to, in effect, suspend Russia from the organization in response to the country’s annexation of Crimea; however, it was made clear that the suspension was temporary. Later on, the Italian Foreign Affairs minister Federica Mogherini and other Italian authorities, along with the EastWest Institute board member Wolfgang Ischinger, suggested that Russia may restore its membership in the group, adding that the return to the G8 format depends on Moscow and on Russian actions. In 2015, the German Foreign Minister Frank-Walter Steinmeier stated that Russia will be able to return to G8 given that there’s no further escalation of the Ukrainian crisis, and Russia continues collaborating with the West on the Syrian conflict. In 2016 he added that "none of the major international conflicts can be solved without Russia", and the G7 countries will consider Russia’s return to the group in 2017. The same year, Japanese Prime Minister Shinzō Abe called for Russia’s return to G8, stating that Russia’s involvement is "crucial to tackling multiple crises in the Middle East". 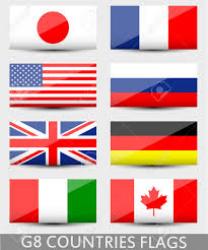