By: Aleksēi Federovich L’vov
For: Brass quintet
This music is in your basket
View basket
Loading... 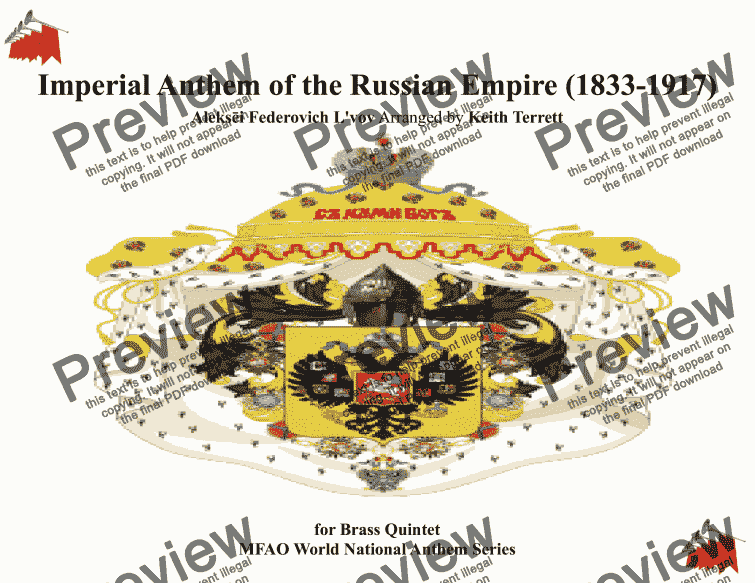 Composer
Aleksēi Federovich L’vov
Year of composition
1833
Arranger
Keith Terrett
Year of arrangement
2016
Publisher
Music for all Occasions
Difficulty
Easy (Grades 1-3)
Duration
1 minute
Genre
World music
License details
For anything not permitted by the above licence then you should contact the publisher first to obtain permission.

An arrangement of the ’’Russian Hymn’’ for classical Brass Quintet.

"God Save the Tsar!" (Russian: Боже, Царя храни!; transliteration: Bozhe, Tsarya khrani!) was the national anthem of the former Russian Empire. The song was chosen from a competition held in 1833 and was first performed on 18 December 1833. The composer was violinist Alexei Lvov, and the lyrics were by the court poet Vasily Zhukovsky. It was the anthem until the Russian Revolution of 1917, after which "Worker’s Marseillaise" was adopted as the new national anthem until the overthrow of the Russian Provisional Government. Many composers made use of the theme in their compositions, most notably Tchaikovsky, who quoted it in the 1812 Overture, the Marche Slave, his overture on the Danish national anthem, and the Festival Coronation March. During the Soviet era, authorities altered Tchaikovsky’s music (such as the 1812 Overture and Marche Slave), substituting other patriotic melodies, such as the "Glory" chorus from Mikhail Glinka’s opera A Life for the Tsar, for "God Save the Tsar". Charles Gounod uses the theme in his Fantaisie sur l’Hymne National Russe (Fantasy on the Russian National Hymn). William Walton’s score for the 1970 film Three Sisters, based on Chekhov’s play, is dominated by the theme.

In 1842, English author Henry Chorley wrote "God, the Omnipotent!", set to Lvov’s tune and published in 19th- and 20th-century hymnals as the Russian Hymn. The Russian Hymn tune continues to appear in various modern English language hymnals, such as those of the United Methodist Church, the Presbyterian Church, the Lutheran Book of Worship of the Evangelical Lutheran Church in America, or as Russia in The Hymnal 1982 of the U.S. Episcopal Church.

Maurice Jarre’s score for the film 1965 film Doctor Zhivago uses this song in several tracks, most notably in the Overture.

In 1998, singer-songwriter Alexander Gradsky, one of the best-known rock artists during the Soviet period, proposed using the song again as the Russian national anthem, but with substantially different lyrics from those originally written by Zhukovsky.