By: Pierre De Geyter (1888-1932) Arranged by Keith Terrett
For: Brass quintet
This music is in your basket
View basket
Loading... 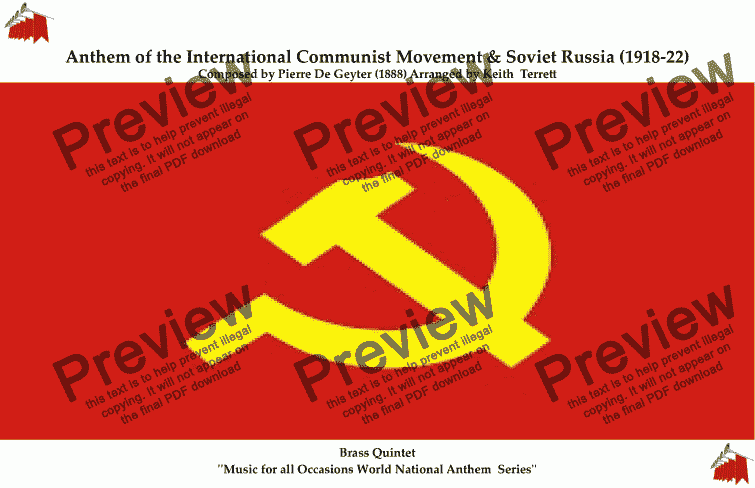 Composer
Pierre De Geyter (1888-1932) Arranged by Keith Terrett
Arranger
Keith Terrett
Publisher
Music for all Occasions
Difficulty
Moderate (Grades 4-6)
Duration
1 minute
Genre
World music
License details
For anything not permitted by the above licence then you should contact the publisher first to obtain permission.

The Internationale" arranged for Brass Quintet & percussion, (French: L'Internationale) is a left-wing anthem. It has been a standard of the socialist movement since the late 19th century, when the Second International (now the Socialist International) adopted it as its official anthem. The title arises from the "First International", an alliance of workers which held a congress in 1864. The author of the anthem's lyrics, Eugène Pottier, attended this congress.

The original French refrain of the song is C'est la lutte finale / Groupons-nous et demain / L'Internationale / Sera le genre humain. (English: "This is the final struggle / Let us group together and tomorrow / The Internationale / Will be the human race."). "The Internationale" has been translated into many languages.

The Internationale has been celebrated by communists, socialists, anarchists, democratic socialists, and social democrats. It was also used by Republicans during the Spanish Civil War. On 15 July 1888, Delory contacted De Geyter to compose music for several "Chants révolutionnaires" that were often sung at popular events with Lille socialists. Among these was a song that was to become the International Workingmen's Association anthem, The Internationale. The lyrics had been written by Eugène Edine Pottier during the "Semaine Sanglante" (the "bloody week," May 22–28, 1871) marking the end and the severe repression of the Paris Commune of 1871. Until then, the song had usually been sung to the tune of the Marseillaise.

It took Pierre one Sunday morning to compose his music on a harmonium. According to one source, he then asked his brother Adolphe to play it on the bugle, and subsequently made some minor changes to the music. The new composition was first played by the Lyre des Travailleurs at the yearly fête of the Lille trade union of newspaper sellers in July 1888. Six thousand leaflets were printed at Pierre's favorite printing firm, Boldoduc, and sold to raise money for the socialist party in Lille. To protect his job, only "Degeyter" was named as the composer but Pierre got sacked anyway and was subsequently blacklisted by Lille employers. He was soon reduced to performing odd jobs, such as making coffins. In 1902, he left Lille with his wife and daughter and moved to Saint-Denis, near Paris.

In fact, Pierre De Geyter had neglected to secure copyright. As the song became ever more popular, his brother Adolphe De Geyter claimed copyright in 1901 and began to collect royalties on it. Pierre had become estranged from the socialist establishment of Lille by siding with the left-wing opponents of the Bloc National government of 1902, and with the Marxist war opponents influenced by Bolshevism, who would later form the communist party. In 1904, Pierre started court proceedings against Adolphe, but Gustave Delory (mayor of Lille by then) supported Adolphe's claim (though in an 1888 meeting with the Ghent socialist leader Edward Anseele he had identified Pierre De Geyter as the author) and, as a result, Pierre was unable to prove his authorship. He lost the case in 1914. At the beginning of 1916, however, during the First World War, Adolphe De Geyter hanged himself, leaving a note for his brother in which he acknowledged his fraud and asserted that he had been pressured by others to make the claim. Pierre, who was in unoccupied France at the time, received the letter only after the war. In 1922, the copyright verdict was reversed. For more of my original music, great arrangements and all the national anthems of the world, check out my on-line stores: http://www.scoreexchange.com/profiles/keith_terret http://musicforalloccasions.org.uk http://www.sheetmusicplus.com/search?Ntt=keith+terrett Need an anthem fast? They are ALL in my store! All my anthem arrangements are also available for Orchestra, Recorders, Saxophones, Wind, Brass and Flexible band. If you need an anthem urgently for an instrumentation not in my store, let me know via e-mail, and I will arrange it for you FOC if possible! keithterrett@gmail.com If you perform this arrangement in public, make a recording or broadcast it through any media, please notify the PRS (UK), or ASCAP (USA), or SOCAN (Canada), or APRA (Australia) or KODA (Denmark) or the equivalent organisation in your own country, giving the name of the arranger as Keith Terrett.