By: Traditional Gaelic Airs arranged for accordion
For: Solo instrument (Accordion)
This music is in your basket
View basket
Loading... 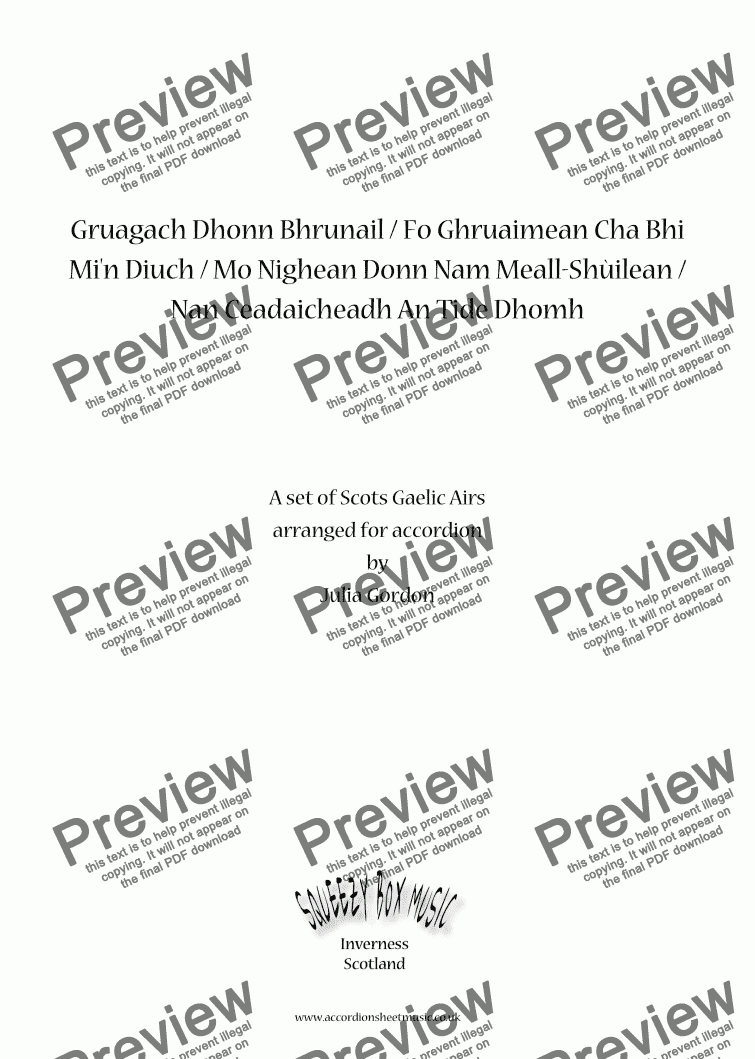 Gruagach Dhonn Bhrunail (The Brown-Haired Lass from Brunel) - Composed by Donald John MacDonald (Dòmhnall Iain Chaluim Nèill) of Garenin, Carloway, Isle of Lewis. A song of unrequited love when a sailor discovers his fiancé went off with another man shortly after he set sail.

Fo Ghruaimean Cha Bhi Mi’n Diuch (I Won’t be Sad Today) - This poignant, traditional lullaby from the time of the potato famine in the mid 19th Century is also known as Bà Bà Mo Leanabh Beag which translates as Hush, My Little Baby.

Mo Nighean Nam Meall-Shùilean (My Brown-Haired Lass with the Beguiling Eyes) - This song appears in the Hew Morrison collection of Ian Mac Colla songs, ’Luinneag Nan Gleann’ (Songs Of The Glen), published in 1885. In this love song, a man would take the girl he loves, even if she had no dowry. However, he is aware that a woman’s love can be unpredictable.

Nan Ceadaicheadh An Tide Dhomh (If Time Would Permit Me) - Composed by William MacKenzie, (1857-1908), born in Shader, Point, Isle of Lewis. The bard tells of how life has become hard for him since the death of his wife, in contrast to when he was young and had looked forward to being happy.

Sorry, there's no reviews of this score yet. Please .
In order to submit this score to ScoreExchange.com Julia Gordon has declared that they own the copyright to this work in its entirety or that they have been granted permission from the copyright holder to use their work. If you believe that this score should be not available here because it infringes your or someone elses copyright, please report this score using the copyright abuse form.