By: traditional
For: Solo instrument (Accordion)
This music is in your basket
View basket
Loading... 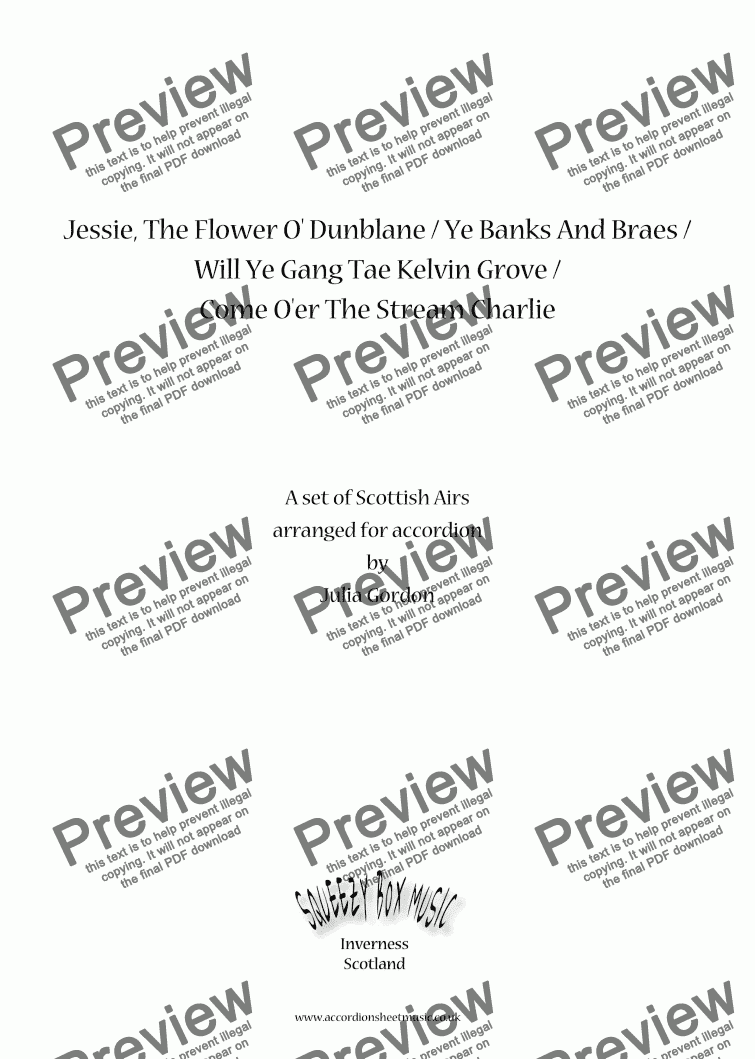 By: traditional
For: Solo instrument (Accordion)

Composer
traditional
Arranger
Julia Gordon
Publisher
Julia Gordon
Difficulty
Easy (Grades 1-3)
Duration
4 minutes
Genre
Folk music
License details
For anything not permitted by the above licence then you should contact the publisher first to obtain permission.

Jessie, The Flower O’ Dunblane - This song was composed by the ‘weaver poet’, Robert Tannahill (1774-1810) of Paisley, and set to an alleged ancient Scottish melody. It is not clear, however, why he should have been inspired by Jessie from Dunblane in Perthshire, but it has become one of his most popular songs.

Ye Banks And Braes - This melody was composed by James Miller, a clerk at the General Register House at Edinburgh in the 18th Century. His friend, Stephen Clarke, afterwards suggested it to Robert Burns who, in 1791, wrote one of his more soulful songs to accompany the tune as he describes a love-lost girl as she wanders by the banks of the river Doon in Ayrshire. Also known as The Banks O’ Doon and Ye Banks And Braes O’ Bonnie Doon.

Will Ye Gang Tae Kelvin Grove - The song was written by Thomas Lyle of Paisley (1792-1859) to the tune of The Shearin’s No For You. Kelvingrove appeared in a volume of his works, ‘Collected Poems and Songs’ in 1837. Kelvin Grove was a picturesque and richly wooded dell a short distance north west of Glasgow and was a favourite place for young people to meet on summer afternoons.

Come O’er The Stream Charlie - The lyrics were written by James Hogg (1770-1835), the Ettrick Shepherd. Also known as MacLean’s Welcome, this is a song commemorating the Jacobite Rising of 1745.

Sorry, there's no reviews of this score yet. Please .
In order to submit this score to ScoreExchange.com Julia Gordon has declared that they own the copyright to this work in its entirety or that they have been granted permission from the copyright holder to use their work. If you believe that this score should be not available here because it infringes your or someone elses copyright, please report this score using the copyright abuse form.