By: Composer unkown Arranged by Keith Terrett
For: Brass quintet
This music is in your basket
View basket
Loading... 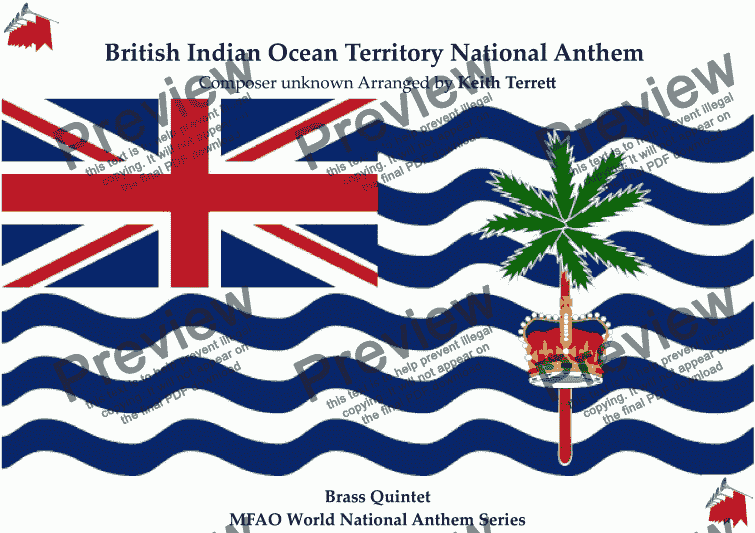 By: Composer unkown Arranged by Keith Terrett
For: Brass quintet

Composer
Composer unkown Arranged by Keith Terrett
Arranger
Keith Terrett
Publisher
Music for all Occasions
Difficulty
Easy (Grades 1-3)
Duration
1 minute
Genre
Classical music
License details
For anything not permitted by the above licence then you should contact the publisher first to obtain permission.

An arrangement of the national anthem of the The British Indian Ocean Territory (BIOT) is an overseas territory of the United Kingdom situated in the Indian Ocean halfway between Tanzania and Indonesia. The territory comprises the seven atolls of the Chagos Archipelago with over 1,000 individual islands – many very small – amounting to a total land area of 60 square kilometres (23 sq mi).

The largest and most southerly island is Diego Garcia, 44 km2 (17 sq mi), the site of a joint military facility of the United Kingdom and the United States. Following the eviction of the native population, the Chagossians, in the 1960s and '70s, the only inhabitants are US and British military personnel and associated contractors, who collectively number around 4,000 (2004 figures). The islands are off-limits to casual tourists, the media, and their former inhabitants.

Mauritius sought to resume control over the Chagos Archipelago which was split from its territory by the UK in 1965 to form the British Indian Ocean Territory. Between 1968 and 1973, the Chagossians, then numbering about 2,000 people, were expelled by the British government to Mauritius and Seychelles to allow the United States to establish a military base on the island. Today, the exiled Chagossians are still trying to return, claiming that the forced expulsion and dispossession was illegal (see Depopulation of Diego Garcia).

British Indian Ocean Territory is one of only two British territories that drives automobiles on the right side of the road, the other being Gibraltar. This has been said to be because the territory was previously occupied by the French, but France ceded the islands to the UK long before the invention of the automobile. It is more likely that this is because the only road in the territory has been used virtually exclusively by the US armed forces since the 1971 treaty.