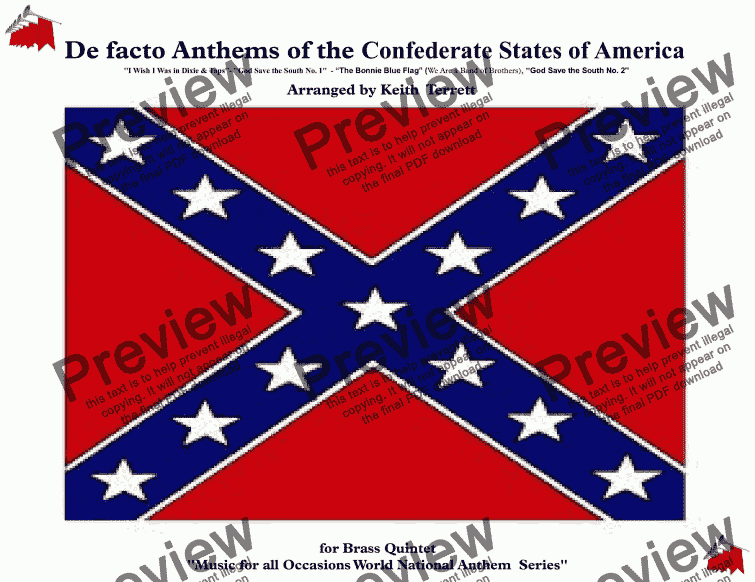 De facto Anthems of the Confederate States of America ''I Wish I Was in Dixie & Taps''- ''God Save the South No. 1'' - “The Bonnie Blue Flag”, ''God Save the South No. 2'', arranged for Brass Quintet & Percussion. The Confederate States of America (also referred to as “The Confederacy” or simply “The South”) had, like the United States at the time, several patriotic songs in use which could have been considered anthems, like “Dixie”, “The Bonnie Blue Flag”, and “God Save the South”, none of which were officially declared (possibly because declaring an official anthem wasn’t as important to a new nation then as it is now). “God Save the South” does have more of an anthemaic quality in the music and lyrics, and several publications of the song refer to it as a (or the) “anthem”, and was also the first song to be published in the Confederacy (which was subsequently published in at least nine editions).

“God Save the South” was written by George H. Miles under the pseudonym Earnest Halphin, soon after the war started. Miles was a Marylander, a state that did not officially secede and join the confederacy, but, being a border state, had several citizens with sympathies for the south. An interesting thing to note about the song is the reference to George Washington (the first president of the United States) in the song’s fifth verse. Apparently, the author of the song meant to tie in Washington’s stance as a rebel against the British in the American revolution with the South’s rebellion against the northern United States in the civil war.

The music was written by C. W. A. Ellerbock, but another tune by C. T. De Cœniél was also popular at the time as well. (Ellerbock’s version, however, seems to be the original.)