By: Hedley Chamberlain
For: Voice + keyboard
This music is in your basket
View basket
Loading... 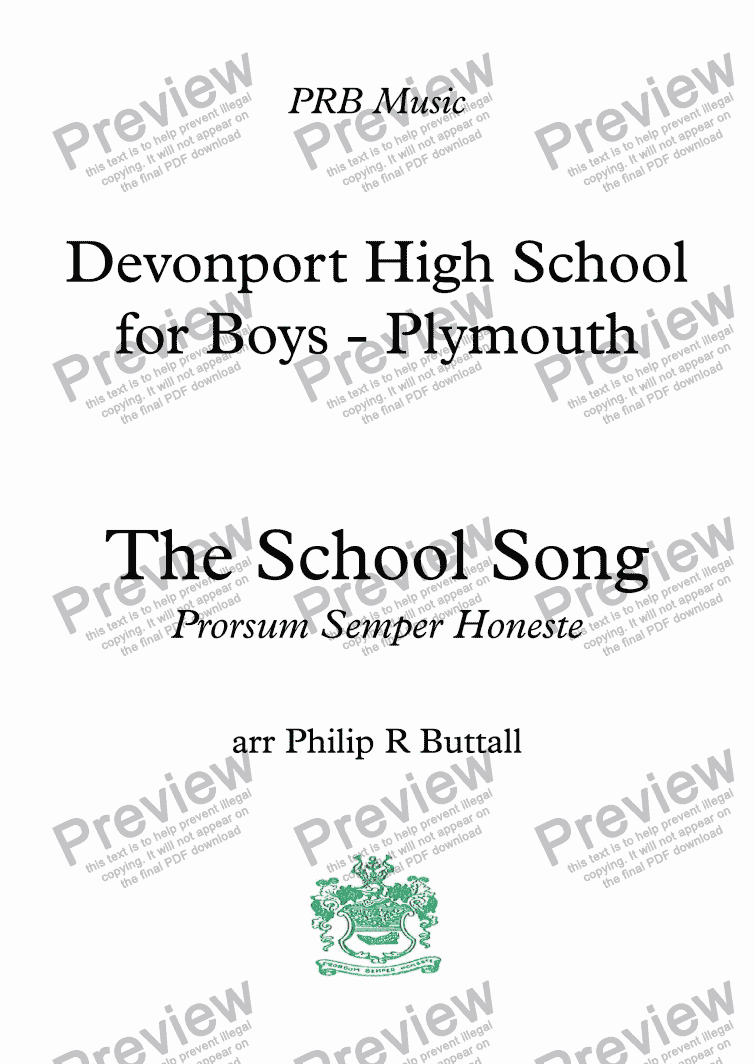 By: Hedley Chamberlain
For: Voice + keyboard

Composer
Hedley Chamberlain
Year of composition
1934
Lyricist
unknown
Publisher
PRB Music
Difficulty
Moderate (Grades 4-6)
Duration
2 minutes
Genre
Other
License details
For anything not permitted by the above licence then you should contact the publisher first to obtain permission.

I look back with great affection to my seven+ years spent as a student of Devonport High School for Boys, Plymouth.

This was one of a number of grammar schools in the city and, at the time was considerably smaller than it is today - with just some 500 or so boys (it was single-sex) on roll.

Obviously many of the traditions of the time have been lost over the years, and especially the quality of the teaching staff, nearly all of whom had their own nicknames which endeared them to generations of alumni of many years - Elmer, Chas, Doc, Tiger, Bunny, Slouch - to name but a few.

Annual Speech Days were important events in the calendar, and on these occasions, not only was the National Anthem always sung - as was common practice in theatres, concerts, etc - but also the School Song.

I can well remember playing in in both performances, and when teaching pupils to learn it. I recall it being a hand-written score (voice & piano), but which I haven’t seen for many, many years now.

I have therefore tried my best to make this arrangement/transcription as accurate as possible which, in terms of the melody, I feel I’ve recalled it pretty accurately. Rhythms aren’t always so easy, because there will be instances where a dotted crotchet/quaver replace two simple crotchets, but at this remove, it’s very hazy now to be able to pinpoint these with absolute accuracy. Even since posting it on Score Exchange, I have tweaked a few rhythms, and will probably do so again, over time - without sight of that original copy, it's the only link I have!

However, there will still be many Old Boys all around the world who might recall having sung it, and won’t worry if the odd note or rhythm isn’t totally authentic. My purpose in doing this was to make it available to all those later alumni of the school, who won’t even know we had a School Song, because, sadly, such things are no longer popular, nor indeed encouraged by the educational ethos of today. If the original hand-written copy I first played from is now lost, then this may well be the only extant record available now.

The song itself was originally words only, but was set to music by one of a succession of Music Teachers at the school - a certain Hedley Chamberlain, who taught there from 1934 to 1943. A subsequent music teacher, George Self, who was at the school from 1949 to 1955, made the first arrangement four-part voices.

This information was taken from a book about the school - A Torch in Flame - The History of Devonport High School for Boys, Plymouth - by Henry Whitfeld (Devon Books 1987 - ISBN 0 86114-796-0). Henry attended the school as a pupil from 1914-1927, and later returned to teach there from 1934-1969, retiring as head of the English Department - always affectionately know as ’Elmer’.

The song itself is simple, yet effective: Its first verse was sung by students from the junior part of the school, and whose voices had yet to break. Everyone joined in for the chorus, while the second voice - cast in the tonic minor, perhaps to add an air of greater seriousness as students were coming to the end of their time at the school, is sung only by those senior students whose voices had, in fact, broken. A quick reprise of the chorus brings everything to an effective close.

’Elmer’ uses a phrase from the song as the title of his book - A Torch in Flame - and the current blazer still shows the school’s Latin motto, which also appeared in the song, though which, because Latin is basically no longer a regular part of the curriculum, most present-day students are unaware of its meaning: Prorsum Semper Honeste - which is, in fact, the motto and coat of arms of Devonport, a district on the west side of the city of Plymouth: ’The arms were granted in 1876 and are appropriate for a naval port and ship-building centre. The upper part shows a naval crown, the lower represents the shipyards. The crest shows a naval crown, anchor and two dolphins. The motto ’Prorsum semper honeste’ means ’Ever forward in uprightness’.