By: L van Beethoven trans Ray Thompson
For: Quintet of Clarinets in Bb
This music is in your basket
View basket
Loading... 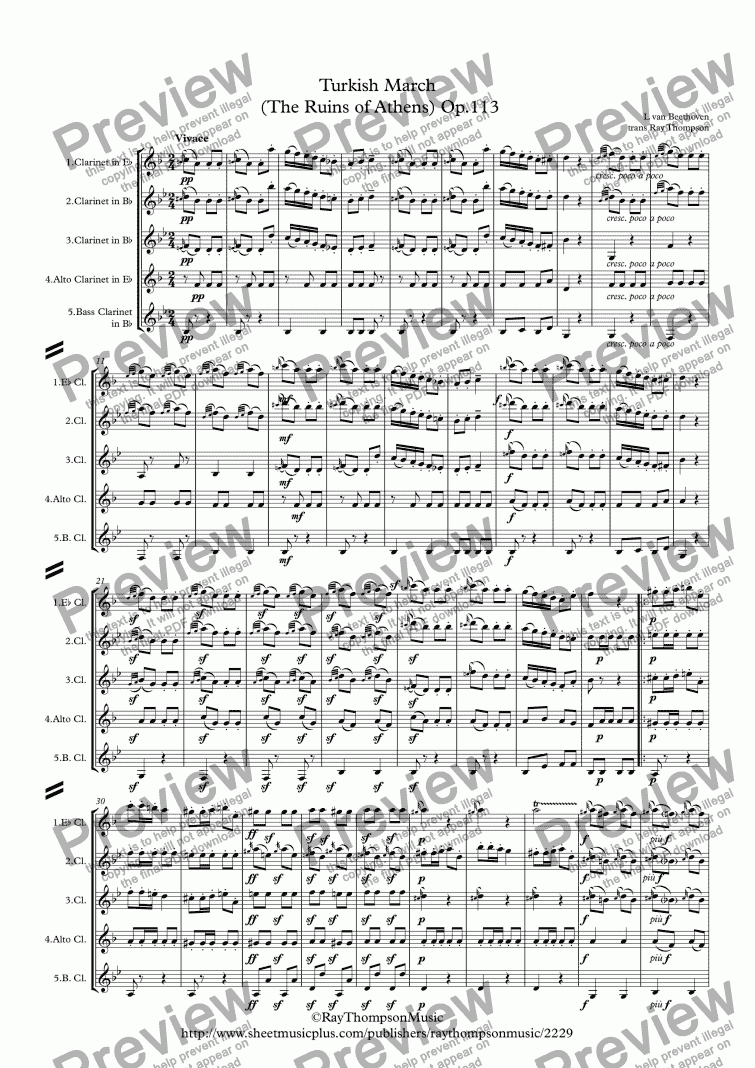 By: L van Beethoven trans Ray Thompson
For: Quintet of Clarinets in Bb

Arranged for clarinet quintet of Eb, 2 Bb, alto and bass.(Alternate Bb parts ptovided for Eb and alto) The Turkish March (Marcia alla turca) is a well-known classical march theme by Ludwig van Beethoven. It was written in the Turkish style popular in music of the time.

The theme was first used in Beethoven's "6 Variations on an Original Theme", Op. 76, of 1809. In 1811 Beethoven wrote an overture and incidental music to a play by August von Kotzebue called The Ruins of Athens (Op. 113), which premiered in Pest in 1812. The Turkish March appears as item No. 4 of the incidental music. Many music lovers associate the theme with The Ruins of Athens, although that was not its original appearance.

The march is in B flat major, tempo vivace and 2/4 time. Its dynamic scheme is highly suggestive of a procession passing by, starting out pianissimo, poco a poco rising to a fortissimo climax and then receding back to pianissimo by the coda. Unlike much of Beethoven's other orchestral music, the woodwinds are the dominant voice rather than the strings.

In my arrangement the melody is held by the three "top" clarinets.

The bass takes the bass line, and the alto clt. adds harmony

It is quite short and is tutti throughout.