By: Christopher Maxim
For: Choir + keyboard
This music is in your basket
View basket
Loading... 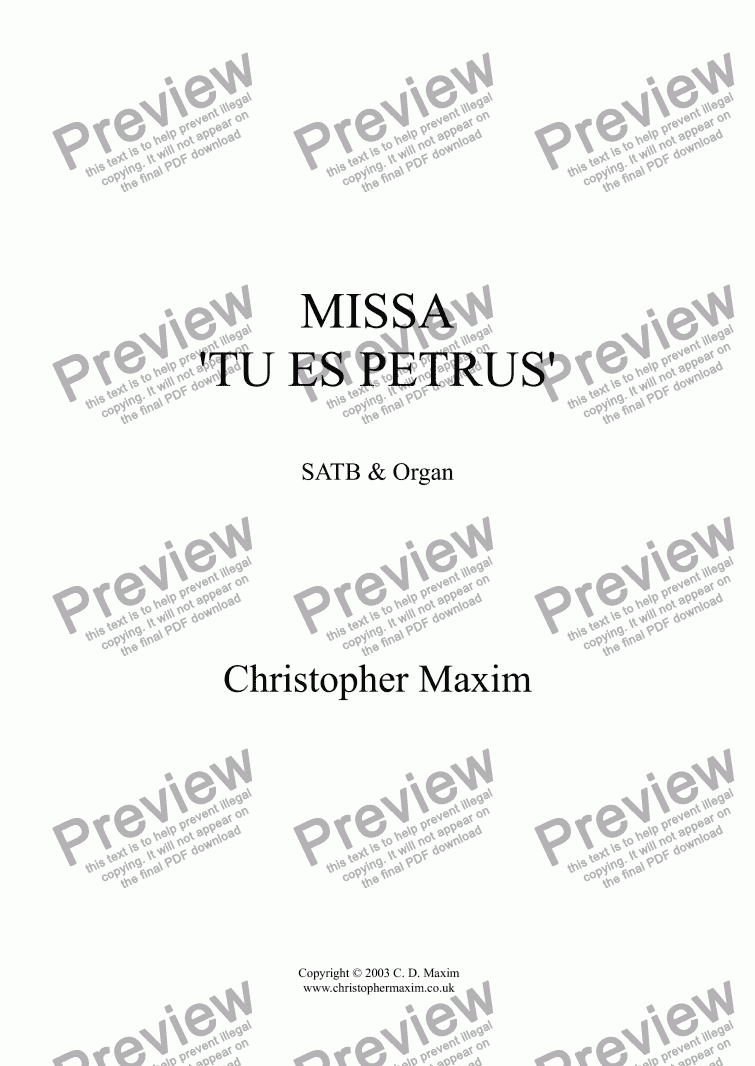 By: Christopher Maxim
For: Choir + keyboard

Composer
Christopher Maxim
Year of composition
2003
Lyricist
Anon.
Difficulty
Difficult (Grades 7+)
Duration
11 minutes
Genre
Modern classical music
License details
For anything not permitted by the above licence then you should contact the publisher first to obtain permission.

Downloading a copy of this score entitles the purchaser to make up to 30 copies – that’s why the single download price is $30.

Missa ’Tu es Petrus’ (You are Peter) was first performed in Peterborough Cathedral in August 2003 by the St Teilo Singers.

The outer sections of the Kyrie feature a stormy organ part that contrasts with the more ’grounded’ (rock-like) choral writing. The central section (Christe eleison) is more contrapuntal than the outer sections. The Kyrie is the most aggressively dissonant movement of this Mass setting.

The Gloria is the longest movement in this Mass setting and features contrasting sections. There is some sub-division of the voices and opportunity for solo work.

The opening of the Sanctus suggests mystery, but the mood gradually changes to one of jubilant praise.

The Benedictus begins in a contrapuntal style; but, at the word ’Hosanna’, material from the Sanctus returns and the mood once again becomes gradually more jubilant.

It is in the Angnus Dei that the plainsong ’Tu es Petrus’ finally reveals itself in full and in its original form (tenor bb.37-40). Elements of the plainsong may be found throughout this Mass setting, but only motivically. The appearance of the entire plainsong in its original form towards the close of the work helps to bring the Mass to a satisfying conclusion and is linked to the prayer that we may be granted peace: ’Dona nobis pacem’.

Sorry, there's no reviews of this score yet. Please .
In order to submit this score to ScoreExchange.com Christopher Maxim has declared that they own the copyright to this work in its entirety or that they have been granted permission from the copyright holder to use their work. If you believe that this score should be not available here because it infringes your or someone elses copyright, please report this score using the copyright abuse form.