By: Composed by Banzoumana Sissoko (1890-1987) Arranged by Keith Terrett
For: Brass quintet
This music is in your basket
View basket
Loading... 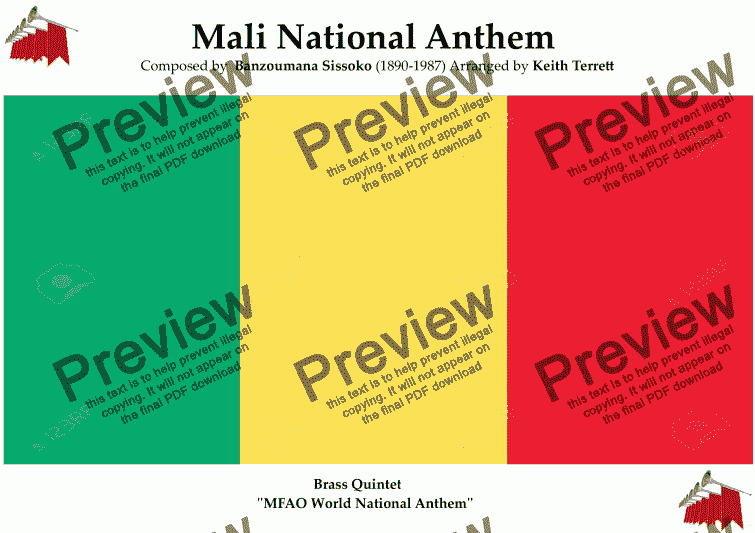 By: Composed by Banzoumana Sissoko (1890-1987) Arranged by Keith Terrett
For: Brass quintet

Composer
Composed by Banzoumana Sissoko (1890-1987) Arranged by Keith Terrett
Arranger
Keith Terrett
Publisher
Music for all Occasions
Difficulty
Easy (Grades 1-3)
Duration
1 minute
Genre
World music
License details
For anything not permitted by the above licence then you should contact the publisher first to obtain permission.

An arrangement of the national anthem of Mali for brass quintet.

Le Mali (popularly known as Pour l'Afrique et pour toi, Mali – French: For Africa and for you, Mali or A ton appel Mali – French: At your call, Mali) is the national anthem of Mali. The words were written by Seydou Badian Kouyaté and the music was by Banzumana Sissoko. Adopted as the national anthem in 1962, its themes are patriotism, national, and African unity. It states the willingness of the people of Mali to lay down their lives for their nation and for liberty. A common theme throughout the song is the desire to strive for a united Africa. Its music is a traditional European style military march.

It was officially adopted less than a year after independence, by 1962. It is traditionally played at state ceremonies by the band of the Garde Républicaine of the Armed Forces of Mali. The Malian Young Pioneer movement of the 1960s translated the anthem in the Bambara language for its rallies.

Banzumana was born blind in Segou. He was considered a major national figure in Mali; Cheick Mahamadou Chérif Keïta writes: "From the late 1950s, when Banzumana Sissoko became known on the national scene, to his death in 1987, the entire Mandenka nation was witness to his categorical refusal to curry favor with any politician or rich patron. It is interesting that in his immensely rich repertoire of both traditional and original songs, not a single one contains praises for a living person."

In his Maanland Mali (Moonscape Mali, 2002; collected into Nomad's Hotel: Travels in Time and Space), the Dutch writer and traveller Cees Nooteboom reports that, at daybreak on November 19, 1968, all small radio transmitters, which had been silent overnight, started playing Banzumana's melodies. He had been banned by the President of Mali Modibo Keita's regime up to that night, as the lyrics of his songs said that all rulers would have been killed. Modibo Keita would be overthrown in a coup d'état on that day. Nooteboom also reports the legend according to which Banzumana's instrument was able to fly, and played alone, when his master was sleeping.