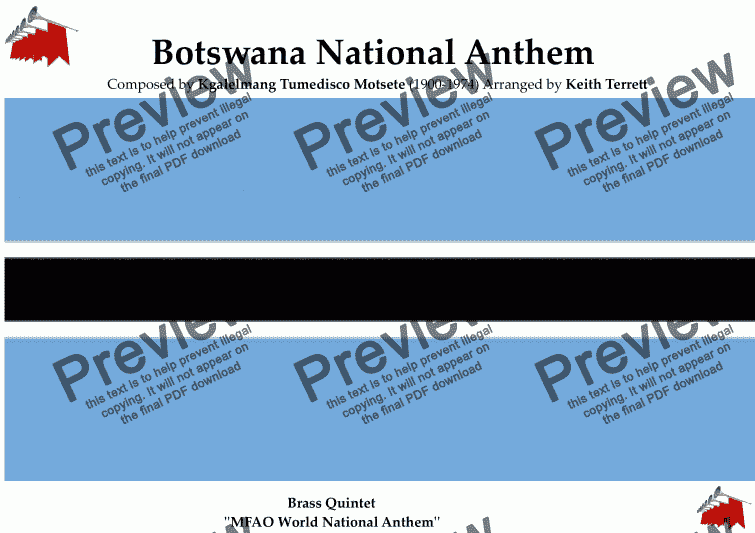 An arrangement of the national anthem of Botswana for Brass Quintet.

"Fatshe leno la rona" (meaning "Our Land" or "Blessed be this Noble Land" in Tswana) is the national anthem of the Republic of Botswana. The music was composed by Kgalemang Tumediso Motsete, who also authored the song's lyrics. It was adopted when the country became independent in 1966.

From the late 19th-century until the height of decolonisation during the 1960s, Bechuanaland (as it was then known) was a protectorate of the United Kingdom within its colonial empire. In the run up to independence, proposals for the national symbols for the future country were made. Although the flag and the coat of arms were chosen in a rather straightforward manner, the selection of the national anthem became a source of contention. Despite its popularity, "Fatshe leno la rona" was reportedly not the frontrunner because its composer – Kgalemang Tumediso Motsete, who possessed "a music degree from London – was also the co-founder and leader of the opposition Botswana People's Party (BPP), which at the time was a radical faction. Instead, the government wanted to maintain "Morena boloka Sechaba sa Etsho" as the anthem after independence. Although the latter song was considered by some government officials to be a "colonial song",[5] it was in fact embraced by nationalists in the south of the continent in their struggle against colonialism, as well as in South Africa during the apartheid era.

"Motsete drafted the song in Ghana and when we were coming back to Botswana he made us sing it."

—Motsamai Mpho reflecting on how the anthem was created by his fellow BPP co-founder. In an interview with the national newspaper Mmegi, fellow BPP co-founder Motsamai Mpho stated that "Fatshe leno la rona" was already in existence in 1962. He confirms that Motsete had penned the anthem in Ghana, where he was inspired by the songs of liberation struggle from that country. Indeed, Mpho asserts that himself, Motsete, and three others affiliated with the BPP were the first people to sing the anthem while returning home on a flight from a Pan-Africanist conference held in Accra that same year.

According to the biographer of Gobe Matenge, a former Permanent Secretary in the Ministry of Home Affairs, he was one of several civil servants – including the future vice president Peter Mmusi – that compelled the Motswana government to adopt "Fatshe leno la rona" as the anthem of the independent nation. In order to ascertain the opinion of the general public on the matter, the government transmitted all of the contending hymns over Radio Botswana. However, Matenge's group was able to obtain recordings of these songs for themselves and air them in front of quasi-town hall gatherings held in major settlements like Lobatse, Molepolole, and Mafikeng, in addition to the capital Gaborone. They strategically played "Fatshe leno la rona" as the last song – which in theory would increase the likelihood that the audience would remember the tune – while having their organisers add words of praise for it in an attempt to sway the crowd's opinion in favour of that hymn. At the end of the exercise, they would circulate a boilerplate form letter articulating the author's viewpoint of "Fatshe leno la rona" being their favourite candidate for national anthem. This was done because of the low levels of literacy in Botswana at the time. Of the multitude of letters sent to the Department of Information and Broadcasting, the vast majority of them expressed an inclination towards the aforementioned song.

However, this account has been disputed by George Winstanley, the first clerk to the Cabinet after independence. He insists that stories about how the government was pressured into ratifying "Fatshe leno la rona" are simply inaccurate, especially in light of the fact that the civil servants who supposedly did this were merely "junior executive officers" at the time.[10] Rather, Winstanley remembers how Seretse Khama initially leaned towards selecting "Morena", before he convinced Khama to select a hymn that was "unique to Botswana". Moreover, Khama's deputy Quett Masire recalled how the future president wanted an anthem that was enduring and would transcend the political spectrum, so that it would not be changed when another political party assumed power in the future.

A total of seven hymns were shortlisted as finalists for the new national anthem. Motsete actually made another submission – "Botswana Fatshe le Lentle" (meaning "Botswana, a Beautiful Country") – in addition to "Fatshe leno la rona"; the two compositions finished runner-up and winner, respectively. The latter was officially adopted in 1966, the year the country gained independence. One of the first public occasions where the anthem was played was at the flag hoisting ceremony at midnight on 30 September 1966, marking the end of British rule over Botswana. The anthem is normally sung in four part vocal harmony. It is performed at events, both at tribal and at national level. For instance, it is sung before traditional village meetings.