By: Composed:José Rufino Reyés Siancas (1835-1905) Arranged by Keith Terrett
For: Brass quintet
This music is in your basket
View basket
Loading... 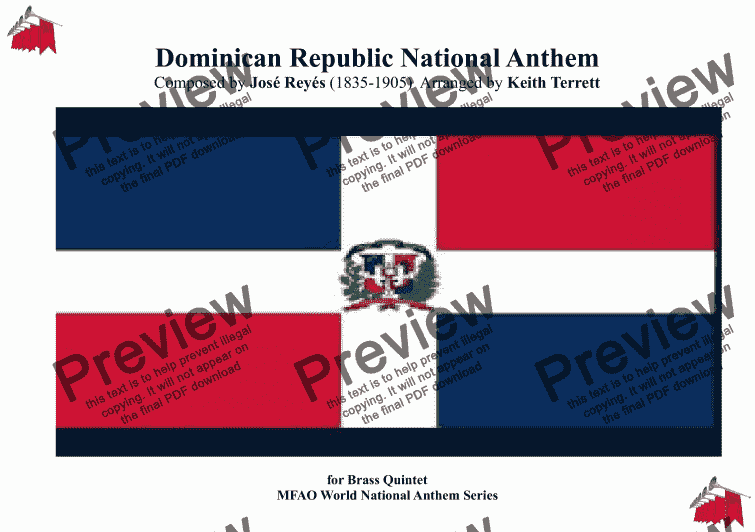 Composer
Composed:José Rufino Reyés Siancas (1835-1905) Arranged by Keith Terrett
Arranger
Keith Terrett
Publisher
Music for all Occasions
Difficulty
Moderate (Grades 4-6)
Duration
2 minutes
Genre
Classical music
License details
For anything not permitted by the above licence then you should contact the publisher first to obtain permission.

The first public performance of the national anthem took place on 17 August 1883. Though the music was an instant success, several objections were made to the lyrics for having various historical inaccuracies. In 1897, Prud’Homme submitted revised lyrics which stand to this day.

On 7 June 1897, the Congress of the Dominican Republic passed an act adopting "Himno Nacional" with the original music and revised lyrics as the country's official national anthem; however, then-President Ulises Heureaux (1846-1899) vetoed the act because the lyric's author, Prud’Homme, was an opponent of the president and his administration. In 1899, Heureaux was assassinated, and the political disorder that ensued prevented the national anthem's legal adoption until 30 May 1934 when "Himno Nacional" was officially adopted and signed into law.

The Spanish name of the Dominican Republic, "República Dominicana", is never used in the anthem's official Spanish lyrics nor is the denonym for Dominicans, "dominicanos". Rather, the indigenous word for the island of Hispaniola, "Quisqueya", is used twice and its derivative denonym, "quisqueyanos", is used once. However, research later shows that these words does not seem to derive from the original Arawak Taíno language.

In public, the national anthem is usually performed through the end of the lyric's fourth paragraph.

Also note that, no official translation of the Spanish lyrics into any other language, including English, has been enacted into law.

José Rufino Reyes y Siancas (también conocido como Jose Reyes) (November 15, 1836 – January 31, 1905) was a Dominican composer, known for writing the music in the Dominican national anthem. Among his other works are compositions of waltzes and marches. He also wrote secular and religious music. José Rufino Reyes was born Santo Dominigo, Dominican Republic, on November 15, 1836. He was the son of Rafael Reyes, a poor retailer, and Mary Merced Siancas. Reyes had no formal education and was raised in cottage dwelling. el era soldado regular del ejercito, where he studied music with the director of the military band, Juan Bautista Fonseca. He learned various musical instruments, with primary focus on the cello. In 1882, alongside Emilio Prud'Homme, he wrote the music for what would later become the national anthem of the Dominican Republic. The following year on August 7 he premiered the composition in celebration of the twentieth anniversary of the restoration of the Republic with lyrics written by Prud'Homme, during a ceremony held at the Lodge La Esperanza. The composition was then again performed on February 27, 1884, in honor of Juan Pablo Duarte in the theater of the Republic during the occasion of the arrival of Duarte's remains in the country, which were deposited in the Chapel of the Immortals.

In 1885, the composition received its greatest public praise when it was performed by the military band teacher Betances, in the Cathedral Square and its popularity then increased on the fiftieth anniversary of the Republic. In 1896 it was nominated to be the official anthem of the country unsuccessfully. On 7 June 1897, the Congress of the Dominican Republic passed an act adopting "Himno Nacional" with the original music and revised lyrics as the country's official national anthem; however, then-President Ulises Heureaux (1846–1899) vetoed the act because the lyric's author, Prud'homme, was an opponent of the president and his administration.José Rufino Reyes died on January 31, 1905, without seeing the national anthem being formalized. His remains were laid to rest by the words of Federico Henriquez y Carvajal. In 1916, the Congress tried once again without results to formalize the anthem. Eventually on May 3, 1934, due to a message sent to Congress by the dictator Rafael Leonidas Trujillo, a law was passed which established Reyes' composition as the official anthem of the Dominican Republic.

If you perform this arrangement in public, make a recording or broadcast it through any media, please notify the PRS (UK), or ASCAP (USA), or SOCAN (Canada), or APRA (Australia) or KODA (Denmark) or the equivalent organisation in your own country, giving the name of the arranger as Keith Terrett.﻿