A Serenade for Brass Band Quintet

By: Franz Schubert
For: Brass quintet
This music is in your basket
View basket
Loading... 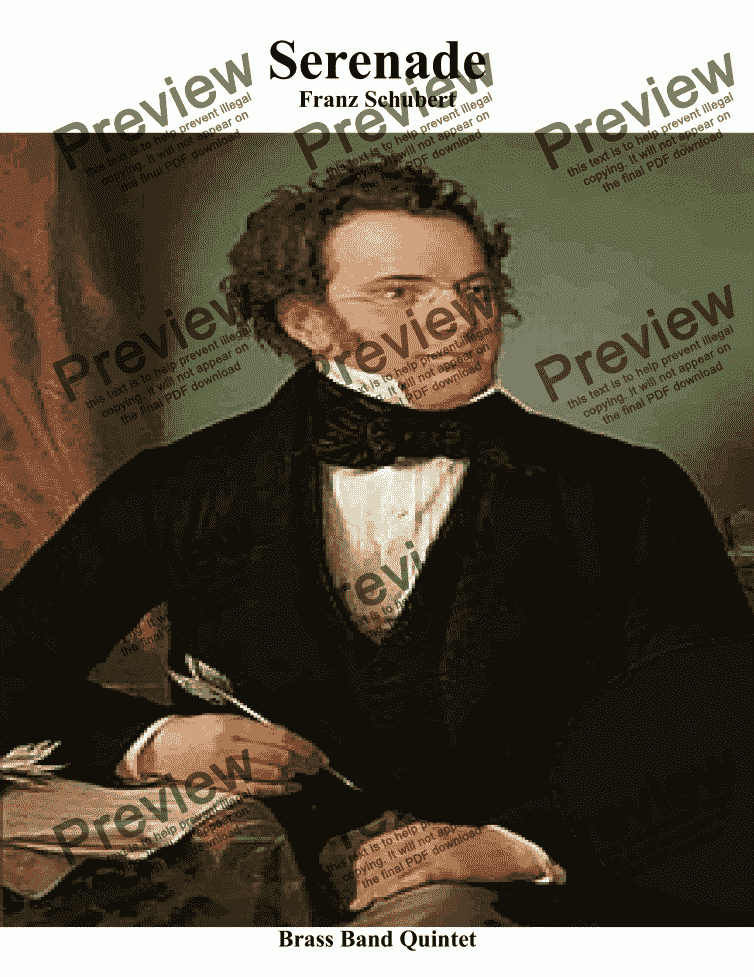 A Serenade for Brass Band Quintet

By: Franz Schubert
For: Brass quintet

Composer
Franz Schubert
Year of composition
1828
Arranger
Keith Terrett
Year of arrangement
2007
Publisher
Music for all Occasions
Difficulty
Moderate (Grades 4-6)
Duration
3 minutes
Genre
Classical music
License details
For anything not permitted by the above licence then you should contact the publisher first to obtain permission.

Schwanengesang ("Swan song"), D.957, is the title of a collection of songs written by Franz Schubert at the end of his life and published posthumously.

The collection was named by its first publisher Tobias Haslinger, presumably wishing to present it as Schubert's final musical testament to the world. Unlike the earlier Die schöne Müllerin and Winterreise, it contains settings of three poets, Ludwig Rellstab (1799–1860), Heinrich Heine (1797–1856) and Johann Gabriel Seidl (1804–1875). Schwanengesang was composed in 1828 and published in 1829 just a few months after the composer's death on 19 November 1828.

In the original manuscript in Schubert's hand, the first 13 songs were copied in a single sitting, on consecutive manuscript pages, and in the standard performance order. All the song titles are by Schubert, as Heine did not give names to the poems. (Reed 259) Tobias Haslinger, Schubert's publisher, collected the songs together as a cycle, most possibly for financial reasons, as Die schöne Müllerin and Die Winterreise collections sold very well. Die Taubenpost is considered to be Schubert's last Lied.

Reviews of A Serenade for Brass Band Quintet