By: Composed by Muhammad Iqbal (1877-1938) Arranged by Keith Terrett
For: Brass quintet
This music is in your basket
View basket
Loading... 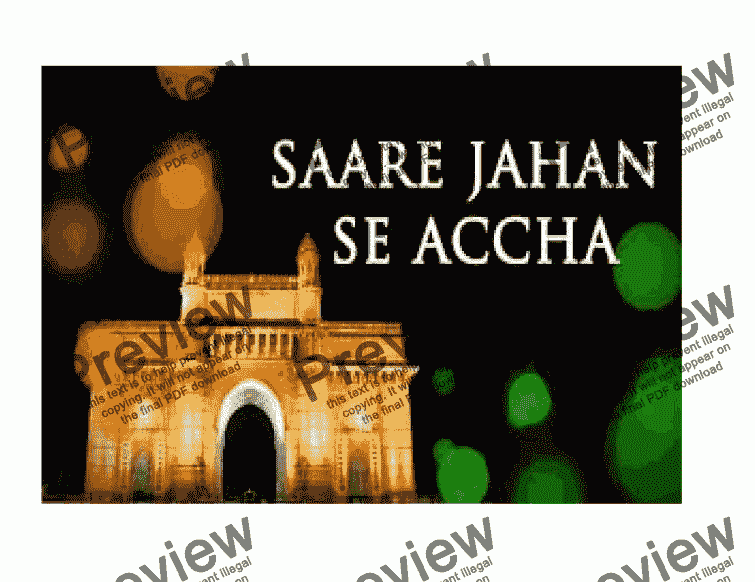 By: Composed by Muhammad Iqbal (1877-1938) Arranged by Keith Terrett
For: Brass quintet

"Sare Jahan se Accha" (Urdu: سارے جہاں سے اچھا‎‎; Sāre Jahāṉ se Acchā) arranged for classical Brass Quintet & Percussion; formally known as "Tarānah-i-Hindi" (Urdu: ترانۂ ہندی‎‎; "Anthem of the People of India"), is an Urdu language patriotic song written for children by poet Muhammad Iqbal in the ghazal style of Urdu poetry.[a] The poem was published in the weekly journal Ittehad on 16 August 1904. Publicly recited by Iqbal the following year at Government College, Lahore, British India (now in Pakistan) it quickly became an anthem of opposition to the British Raj. The song, an ode to Hindustan—the land comprising present-day Bangladesh, India and Pakistan, was later published in 1924 in the Urdu book Bang-i-Dara.

his arrangement can be arranged for any instruments of your choice, e-mail me with your requirements:keithterrett@gmail.com