The Complete Communion Anthems for the new Catholic Liturgy 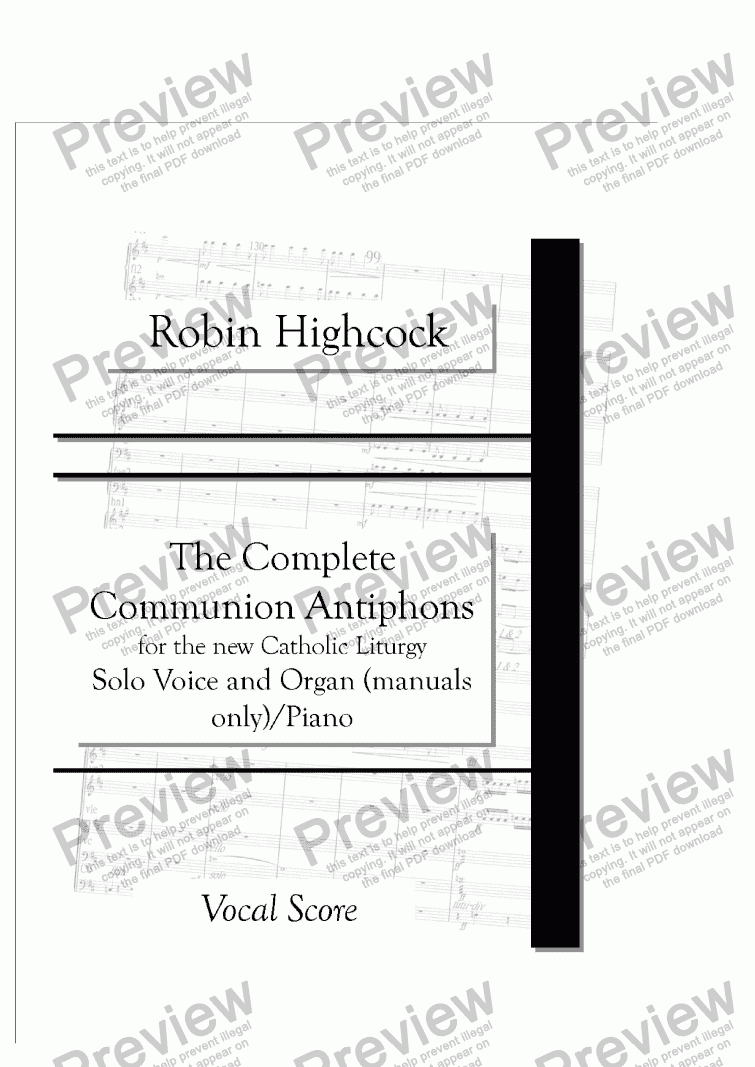 Note If you have downloaded this before you will have found the voice part incorrect. This has now been corrected and I suggest that you download the voice part again. Sorry for the inconvenience

The Communion Antiphon often suffers during the celebration of Mass. Sometimes there is a half-hearted attempt by the congregation to say it, which can descend into an indistinct mumble. The Celebrant will sometimes lead the congregation which produces a shuffling of missals and mass sheets as the congregation tries to find its place, usually too late.

This is a great pity because these sentences are beautiful and full of meaning. They also occur at a point in the Mass where there is often music. These settings will give an opportunity for these words to take their proper part in the Mass.

The settings are designed to be simple and easily performed but not at the expense of musical variety and originality. They are short, with each setting only taking up one page of voice and accompaniment.

The antiphons are all unison, designed to be sung either by a cantor or a unison group/choir of either female, male or mixed voices. The accompaniment doubles the tune throughout, helping the singers. The organ/piano/keyboard part is simple, being written as much as possible in three or four parts. The pitch range is in general, from B-D. Musical coherence sometimes demands that this is increased a little but is never extreme. The antiphons are mostly written in straightforward keys, although, again, the needs of musical logic and pitch range lead to the occasional foray into four flats or sharps. The antiphons make no musical compromises, some of them are simple and a group of amateur singers will be able to learn them in one rehearsal. Others, particularly those with expressive or significant words will need a little more rehearsal time but none of them are beyond the skill of amateurs. In general antiphons for feast days and for Advent, Christmas, Lent and Easter are a little longer and more demanding than those for days in Ordinary Time. Each antiphon begins with a straightforward introduction which gives the singers the opening note. Each antiphon has a metronome mark and I would strongly encourage performers to follow these. Occasionally, alternative small notes have been added if the pitch is particularly high or low.

In order to submit this score to ScoreExchange.com Robin Highcock has declared that they own the copyright to this work in its entirety or that they have been granted permission from the copyright holder to use their work. If you believe that this score should be not available here because it infringes your or someone elses copyright, please report this score using the copyright abuse form.

Reviews of The Complete Communion Anthems for the new Catholic Liturgy