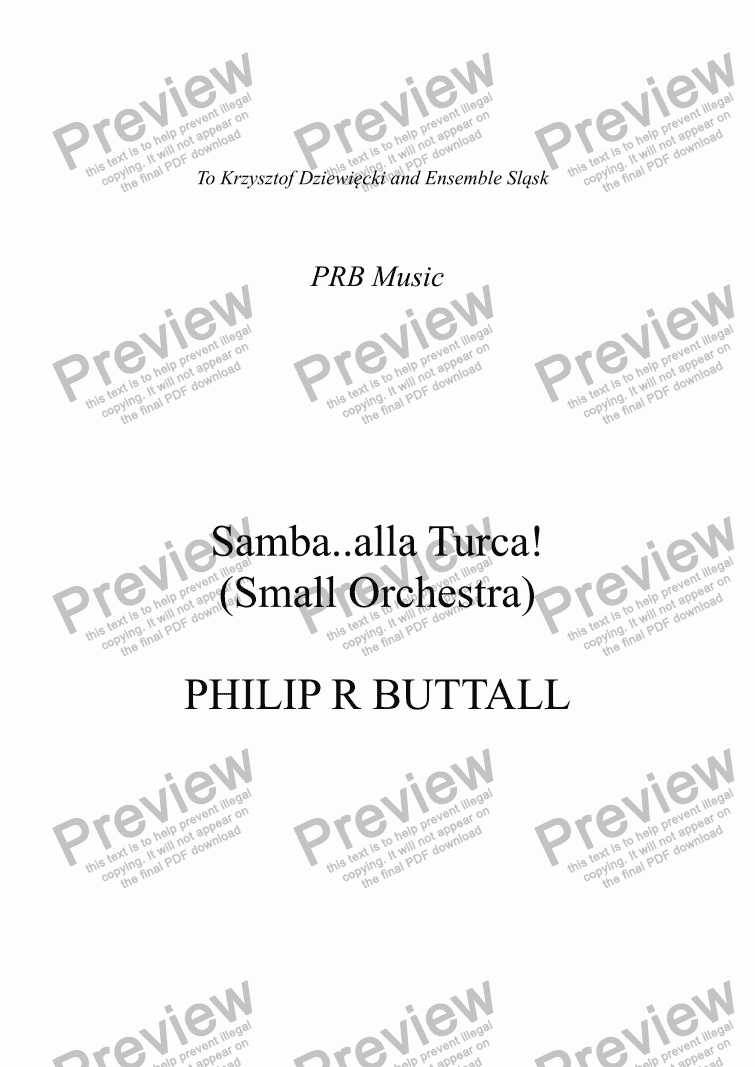 Composer
Philip R Buttall
Year of composition
2017
Publisher
PRB Music
Difficulty
Difficult (Grades 7+)
Duration
3 minutes
Genre
Classical music
License details
For anything not permitted by the above licence then you should contact the publisher first to obtain permission.

Samba alla Turca! has been one of my most popular scores at Sibelius Music, and now Score Exchange.

It is available in many versions, many of which have been specially requested by customers, or fellow musicians.

I have had an orchestral version available for a long time - indeed, it has been useed on more than one occasion, both by Northern Ireland's Ulster Orchestra, as well as the CBSO.

A musical colleague, and Facebook friend of long standing, Krzysztof Dziewięcki, who lives in Katowice, Poland, conducts a number of ensemble in and around the area. He wanted an orchestral version that would suit his Ensemble Slask - Slask is the Polish word for a part of the country that we call Silesia. He was able to use the regular complement of strings, but had a smaller wind section. The ensemble comprises Flute (doubling Piccolo), Oboe, 2 Clarinets, Bassoon, 2 Horns, 2 Trumpets, Trombone and Timpani. To this he was able to add the parts for Drum Kit, Maracas, and Triangle / Tambourine.

It wasn't just a matter of deleting the parts that weren't now required, but a certain re-arrangement of the new existing ones was necessary to maintain balance. Essentially it could be played by single woodwind, without too much loss.

Chris intends to use this slightly cut-down arrangement at a New Year event.

Mozart would be proud!!!
Wonderful!

Thank you so much for your kind review/comment!

The work has proved very popular around the world, and in a number of different versions.

Previous Next
In order to submit this score to ScoreExchange.com Philip R Buttall has declared that they own the copyright to this work in its entirety or that they have been granted permission from the copyright holder to use their work. If you believe that this score should be not available here because it infringes your or someone elses copyright, please report this score using the copyright abuse form.