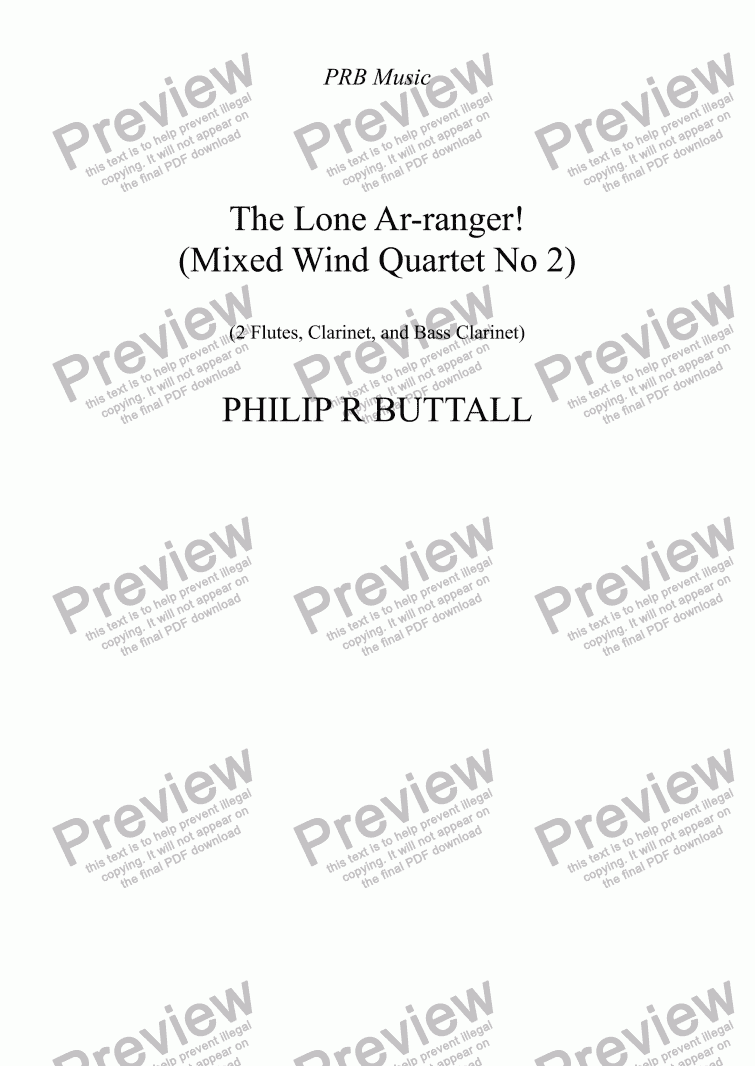 Composer
Philip R Buttall
Publisher
PRB Music
Difficulty
Difficult (Grades 7+)
Duration
3 minutes
Genre
Classical music
License details
For anything not permitted by the above licence then you should contact the publisher first to obtain permission.

The Lone Ar-ranger! has not only been my most popular score ever, but also the first one I uploaded to the then SibeliusMusic. Since then it has appeared in many versions, some of which I decided to use, but also some bespoke ones, and particularly where the combination of instruments was unique, and didn't really fit any existing version.

Some years back, I let Brackley Wind Ensemble (Northamptonshire) have a couple of my arrangements, as one of their members used to play in our school Recorder Group, as well as Wind Band, before university, getting married and moving away from the South West.

I was delighted to hear from Jo again, a couple of days ago, to say that she was also getting together in a smaller ensemble, and wanted to play The Lone Ar-ranger! but needed the parts tweaked to accommodate the new scoring. As Jo would have originally played the piece in its original form on the recorder, I was delighted to help.

But, rather than just transpose a part here and there, because of Jo's particular requirement, it was easier to make a new arrangement, as I had already done for a colleague in Slovenia. I have since identified that version as 'No 1', and Jo's version as 'No 2'.

Jo basically needed a 'quartet version', but comprising 2 Flutes, Clarinet (Jo), and Bass Clarinet. That in itself was no problem, but because the bass clarinet was a shared band instrument, there would be occasions when it would be unavailable. Hence the part for a second Bb clarinet which replaces the bass clarinet when needed, and where. as far as possible, I have minimized the difference in range between the two. Hope it will work, either way!

Reviews of The Lone Ar-ranger! (Mixed Wind Quartet No 2)