Be Thou My Vision (Hymn Tune:Slane) for Saxophone Quintet

By: Ancient Irish Hymn from the 8th Century Arranged by Keith Terrett
For: Saxophone quartet
This music is in your basket
View basket
Loading... 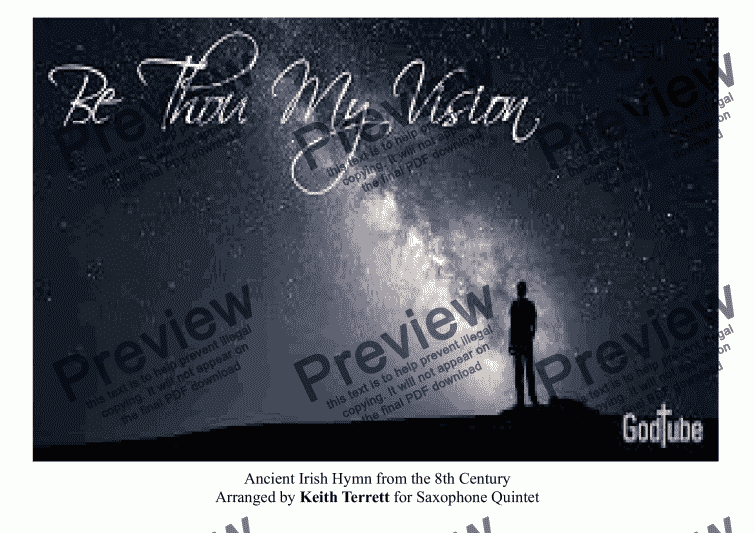 Be Thou My Vision (Hymn Tune:Slane) for Saxophone Quintet

By: Ancient Irish Hymn from the 8th Century Arranged by Keith Terrett
For: Saxophone quartet

Composer
Ancient Irish Hymn from the 8th Century Arranged by Keith Terrett
Arranger
Keith Terrett
Year of arrangement
2017
Publisher
Music for all Occasions
Difficulty
Moderate (Grades 4-6)
Duration
1 minute
Genre
World music
License details
For anything not permitted by the above licence then you should contact the publisher first to obtain permission.

Arranged for Saxophone Quintet, "Be Thou My Vision" (Old Irish: Rop tú mo baile or Rob tú mo bhoile) is a traditional hymn from Ireland. The most well known English version, with some minor variations, was translated by Eleanor Hull and published in 1912. In 1919, the lyrics were set to the tune of the Irish folk tune "Slane", to which the song is sung to this day, both in English and Irish. The song dates from at least the eighth century, though it has often been attributed to the sixth-century Irish Christian poet Saint Dallan.

Reviews of Be Thou My Vision (Hymn Tune:Slane) for Saxophone Quintet