By: Dylan Christopher
For: Orchestra
This music is in your basket
View basket
Loading... 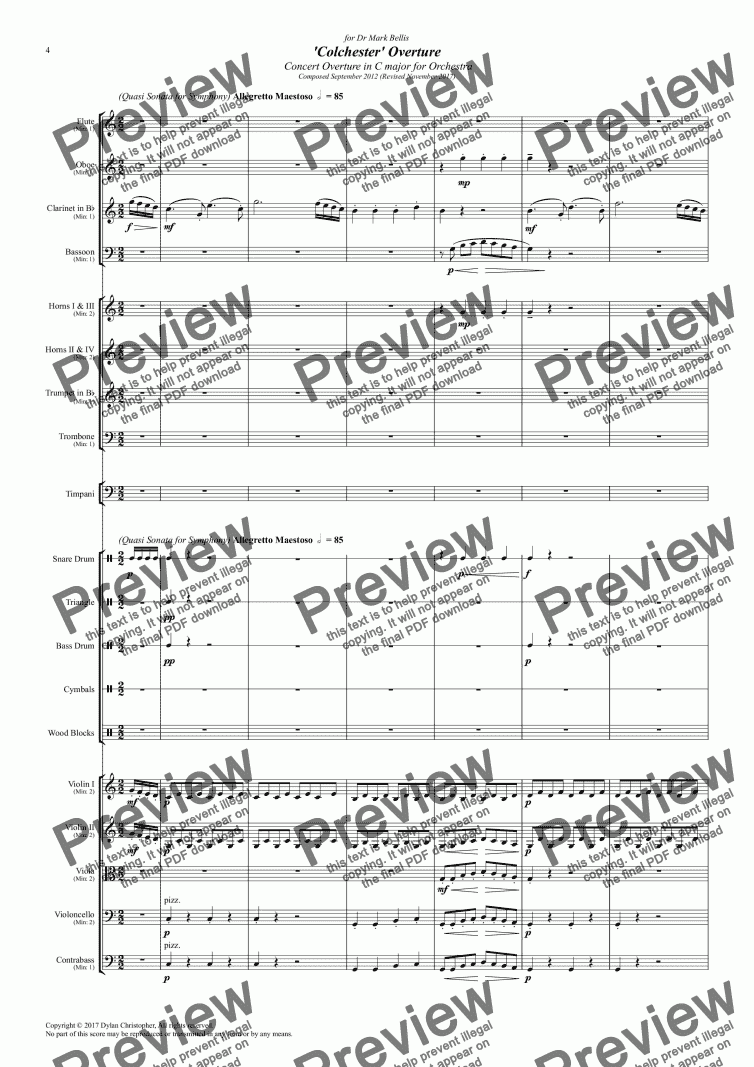 By: Dylan Christopher
For: Orchestra

Composer
Dylan Christopher
Year of composition
2012
Publisher
Dylan Christopher
Difficulty
Difficult (Grades 7+)
Duration
7 minutes
Genre
Classical music
License details
For anything not permitted by the above licence then you should contact the publisher first to obtain permission.

I moved to Colchester to study at Colchester Institute in 2007, as a student; the completion of this piece in 2017 marked ten years living in this town full of history and culture.

The writing of this piece of music started in September 2012, incidentally five years after moving to the town, and two years after graduating, my undergraduate studies. However, it was not completed due to a compositional hiatus, prompted by a large increase in private teaching work, and solo piano study and other performance opportunities.

Work resumed in September 2017, after prolific compositional activity, largely due to words of encouragement from Dr Mark Bellis, the dedicatee, and compositional mentor while studying at Colchester Institute.

In a single movement, the music follows a ternary structure following an unrepeated, extended, sonata form and related modulations. Optimistic from the outset, the music is in C major, featuring the rising motive heard in the opening bars throughout the music. The use of percussion is symbolic of Colchester’s status as a Garrison town; specifically, the ostinato rhythm of the snare drum implying a march.

Sorry, there's no reviews of this score yet. Please .
In order to submit this score to ScoreExchange.com Dylan Christopher has declared that they own the copyright to this work in its entirety or that they have been granted permission from the copyright holder to use their work. If you believe that this score should be not available here because it infringes your or someone elses copyright, please report this score using the copyright abuse form.