By: Claude Debussy Arranged Keith Terrett
For: Sextet
This music is in your basket
View basket
Loading... 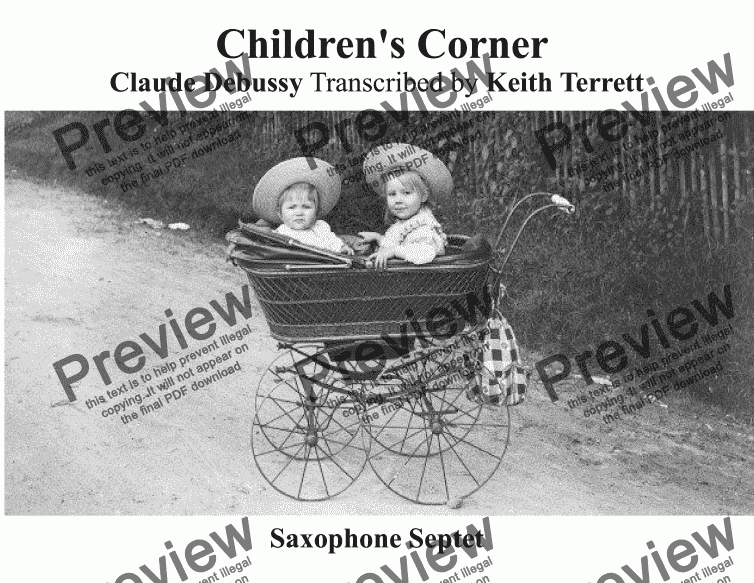 Composer
Claude Debussy Arranged Keith Terrett
Year of composition
1908
Publisher
Music for all Occasions
Difficulty
Difficult (Grades 7+)
Duration
10 minutes
Genre
Classical music
License details
For anything not permitted by the above licence then you should contact the publisher first to obtain permission.

Children's Corner arranged for Saxophone Septet, L. 113, is a 6-movement suite for solo piano by Claude Debussy. It was published by Durand in 1908, and was given its world première in Paris by Harold Bauer on 18 December that year. In 1911, an orchestration of the work by Debussy's friend André Caplet received its première and was subsequently published. A typical performance of the suite lasts roughly 15 minutes.

It is dedicated to Debussy's daughter, Claude-Emma (known as "Chou-Chou"), who was three years old at the time. The pieces are not intended to be played by children; rather they are meant to be evocative of childhood and some of the toys in Claude-Emma's toy collection.

Claude-Emma was born on 30 October 1905 in Paris, and is described as a lively and friendly child who was adored by her father. She died of diphtheria on 14 July 1919, scarcely a year after her father's death.