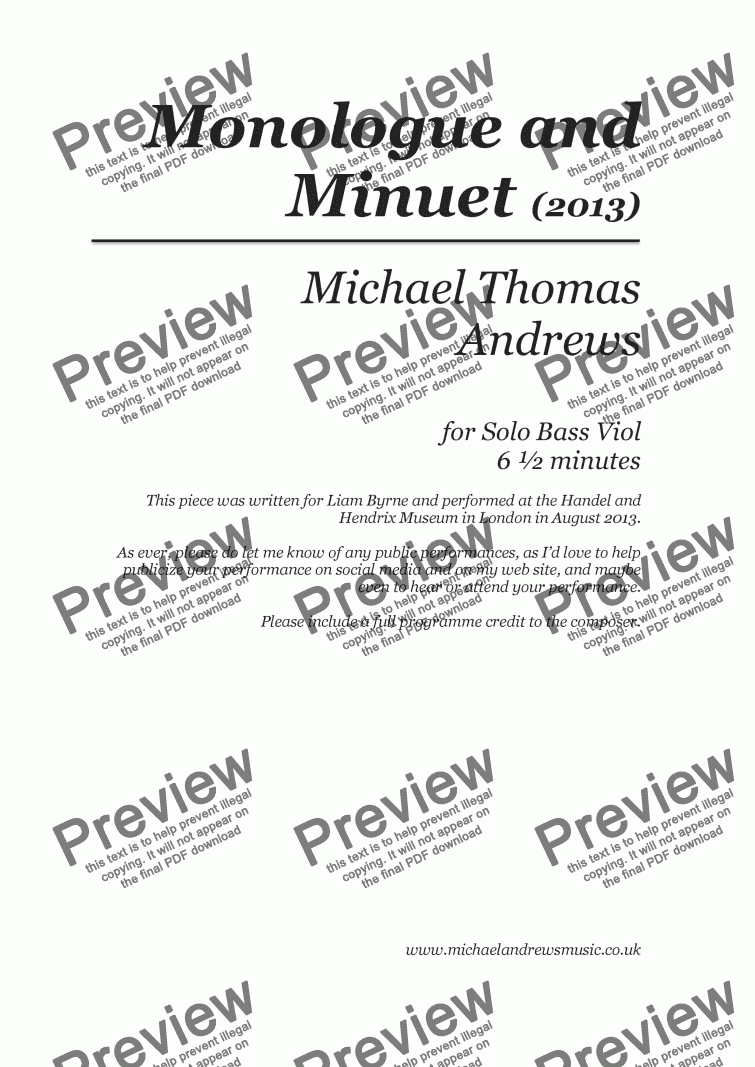 Written for Liam Byrne (Fretwork) and premiered at the Handel and Hendrix Museum in central London, 2018. The piece has since been played at numerous performances including the Cross-Linx Festival in the Netherlands. You can listen to a recording of that performance here: https://youtu.be/Fj7BkCWlRQE?t=3m9s

The minuet itself is the kernel at the centre of the piece, sandwiched by a more declamatory opening and finale. As I've been writing this piece, I've been reading Samuel Pepys' diary entries and was surprised to find out that he played the viola da gamba – there are frequent references to him spending an hour or two at the instrument, either in the morning before venturing off to work or in the evening while getting inebriated with some friends. His father had passed down to him a bass viol – an instrument with six strings, although this piece has been written for the seven-stringed version (the addition of the seventh string is generally attributed to the French in the mid-17th century)

Often Pepys is described as not having any music to perform from in his diaries. This piece tries to capture a little bit of that improvisatory flair while being fully notated. I’ve also attempted to encapsulate that the instrument, for Pepys, was often a place to escape to before starting work. This is highlighted particularly by the more lute-like Bohemian passage in the centre of the piece where the instrument is strummed rather than bowed.

In order to submit this score to ScoreExchange.com Michael Thomas Andrews has declared that they own the copyright to this work in its entirety or that they have been granted permission from the copyright holder to use their work. If you believe that this score should be not available here because it infringes your or someone elses copyright, please report this score using the copyright abuse form.

Reviews of Monologue and Minuet