By: Traditional Welsh lullaby Arranged by Keith Terrett
For: Solo Bansuri + piano
This music is in your basket
View basket
Loading... 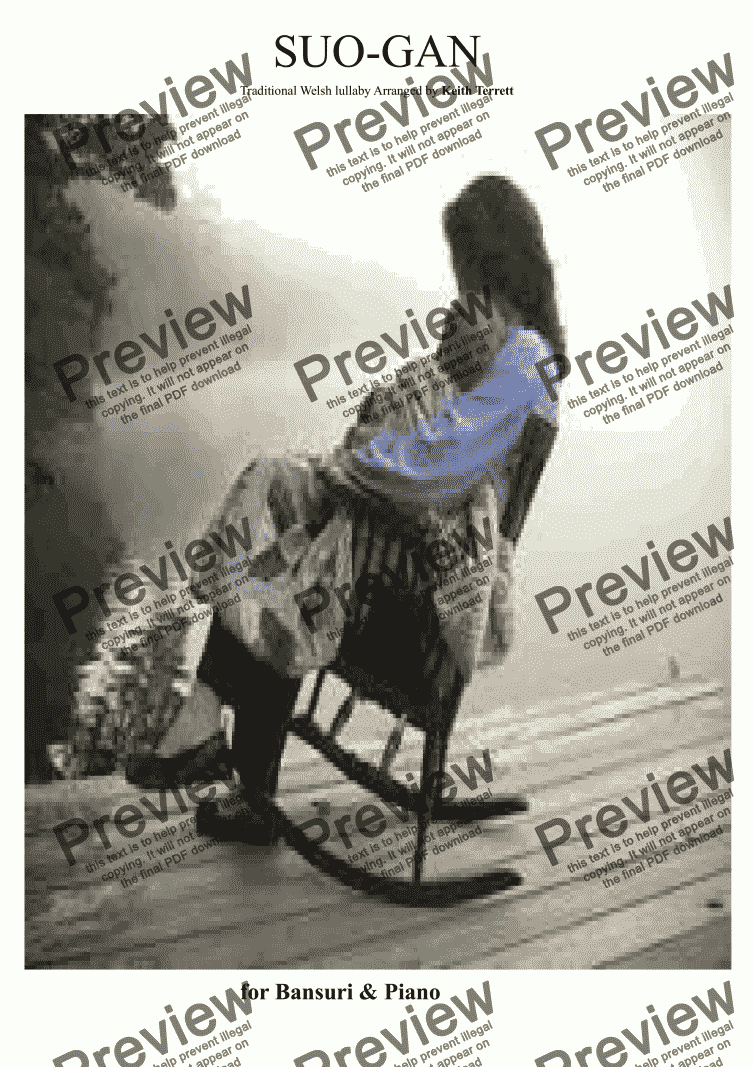 Composer
Traditional Welsh lullaby Arranged by Keith Terrett
Arranger
Keith Terrett
Publisher
Music for all Occasions
Difficulty
Moderate (Grades 4-6)
Duration
2 minutes
Genre
World music
License details
For anything not permitted by the above licence then you should contact the publisher first to obtain permission.

It was first recorded in print around 1800 and the lyrics were notably captured by the Welsh folklorist Robert Bryan (1858–1920). The song's title simply means lullaby (suo = lull; cân = song).Need an anthem fast? They are ALL in my store! All my anthem arrangements are also available for Orchestra, Recorders, Saxophones, Wind, Brass and Flexible band. If you need an anthem urgently for an instrumentation not in my store, let me know via e-mail, and I will arrange it for you FOC if possible! keithterrett@gmail.com If you perform this arrangement in public, make a recording or broadcast it through any media, please notify the PRS (UK), or ASCAP (USA), or SOCAN (Canada), or APRA (Australia) or KODA (Denmark) or the equivalent organisation in your own country, giving the name of the arranger as Keith Terrett.

A bansuri is a side blown flute found in many parts of India, Pakistan, Bangladesh, Sri Lanka and Nepal, and a musical instrument that is common in the North Indian or Hindustani classical music. It is an aerophone produced from bamboo, and a similar flute is called Venu in the South Indian or Carnatic classical music. The bansuri flute is an ancient musical instrument of the Indian subcontinent. It is called nadi and tunava in the Rigveda and other Vedic texts of Hinduism. Its importance and operation is discussed in the Sanskrit text Natya Shastra.

A bansuri is traditionally made from a single hollow shaft of bamboo with six or eight finger holes, but modern designs come in ivory, fiberglass and various metals. The six hole instrument covers two and a half octaves of music. The bansuri is typically between 30 centimetres (12 in) and 75 centimetres (30 in) in length, and the thickness of a human thumb.[1][8] One end is closed, and few centimeters from the closed end is its blow hole. Longer bansuris feature deeper tones and lower pitches. The traditional design features no mechanical keys, and the musician creates the notes he wants by tapping the various finger holes.

The bansuri-like flute is depicted in ancient Buddhist, Hindu and Jain temple paintings and reliefs, as well as is common in the iconography of the Hindu god Krishna, it is intimately linked to the love story of Krishna and Radha. The bansuri is revered as Lord Krishna's divine instrument and is often associated with Krishna's Rasa lila dance. These legends sometimes use alternate names for this wind instrument, such as the murali. However, the instrument is also common among other traditions such as Shaivism. The early medieval Indian texts also refer to it as vamshi, while in medieval Indonesian Hindu and Buddhist arts, as well as temple carvings in Java and Bali dated to be from pre-10th century period, this transverse flute has been called wangsi or bangsi.