By: Bernardo Hernandez
For: Voice + keyboard
This music is in your basket
View basket
Loading... 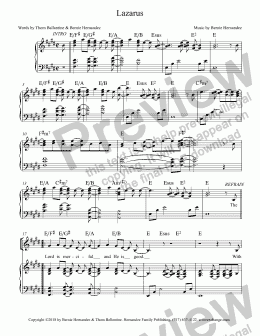 By: Bernardo Hernandez
For: Voice + keyboard

God isn’t an imposer, He’s an inviter. I found that out firsthand in 1992, at age 28, when I accepted His invitation to let His Son, Jesus, be my Savior, Lord and Friend. Jesus says in John 3:5, "Verily, verily, I say unto thee, except one be born of water and the Spirit, he cannot enter into the kingdom of God!" Well, I was born of water when I was baptized as an infant. But I wasn't born of the Spirit until I had that conversion experience when I was in my late twenties!

In 1979, when my fraternal twin brother, Al, and I, were in 9th grade, he was stricken with leukemia. Tragically, after a remission that gave our family hope that he would beat the cancer, Al relapsed and subsequently died in 1980. I became angry with God, thinking to myself, ‘if there was a God, he would have restored Al to health; not just gotten our hopes up with a remission, only to have him relapse, and die in such a horrible way, to cancer.’

For the rest of high school and throughout college, I lost myself mostly in my music endeavors. In my second year of college I joined a professional Top-40 cover band to help pay for school. After college, in 1986, one of my best friends, Mike, and I formed an all-original duo. In 1992, my roommate (who was my cousin Lisa), her friend Suzan, and a mutual friend of all of ours, Thom, were working on a Christian musical, and they needed another composer to put music to the lyrics.

They kept trying to get me to join them, but I resisted and I kept telling them I wasn’t interested, though the Lord had started to call me to Himself by then. But they were persistent, and listening to the Holy Spirit, left a copy of the libretto on the piano for me to find. Eventually I was intrigued enough, and I accepted the invitation, as it were, and opened up to the lyrics of a song that was to be sung by Lazarus in the musical, after he had been raised from the dead by Jesus.

Chords immediately came to me that I had never thought of before! The chords then suggested a melody. And this song came together almost effortlessly, as if someone else were playing through me. As Lazarus was raised back to life, I was being given new life in that season, and was truly “born again”! Not only had I then found salvation, but the Lord also gave me the gift of a song to remember it by!

Upon my conversion I was immediately and supernaturally empowered to overcome sinful habits that had plagued me and I found out my true purpose in life, and the purpose for my music. Then, just as importantly, it was not long after that, that the Lord led me to cross paths with my future wife, DeSales! Praise the Lord! Thank you, Jesus!

Sorry, there's no reviews of this score yet. Please .
In order to submit this score to ScoreExchange.com Bernardo Hernandez has declared that they own the copyright to this work in its entirety or that they have been granted permission from the copyright holder to use their work. If you believe that this score should be not available here because it infringes your or someone elses copyright, please report this score using the copyright abuse form.