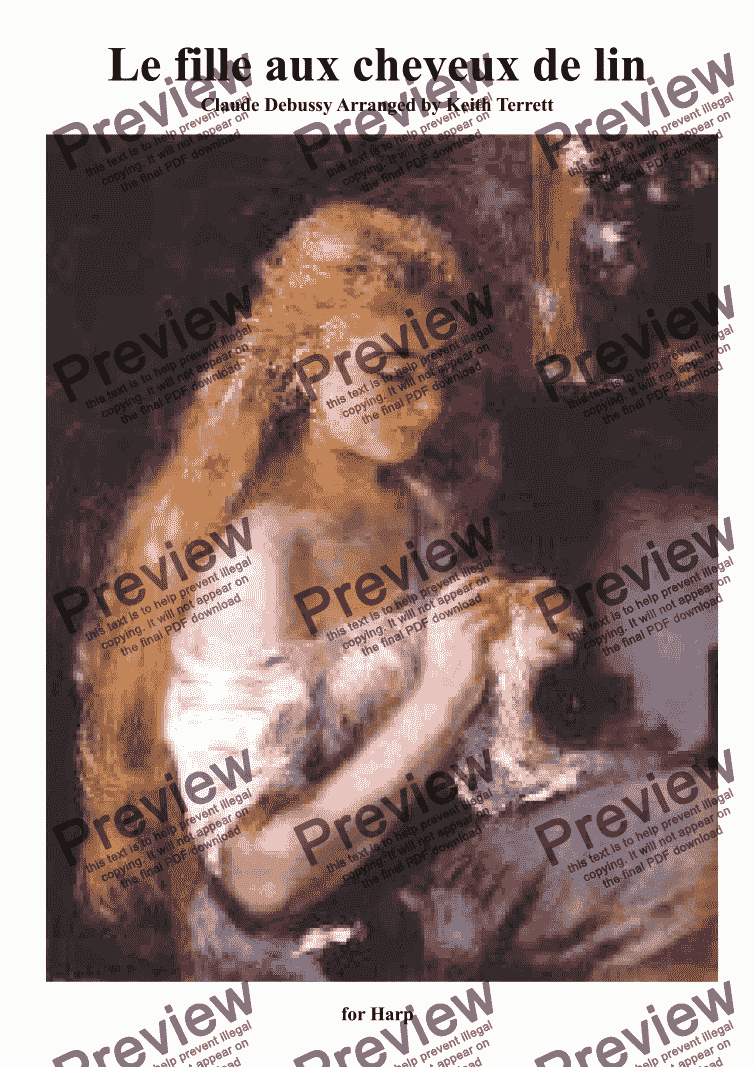 The Girl with the Flaxen Hair arranged/transcribed for Harp.

La fille aux cheveux de lin is a musical composition by French composer Claude Debussy. It is the eighth piece in the composer's first book of Préludes, written between late 1909 and early 1910. The title is in French and translates roughly to "The Girl with the Flaxen Hair". The piece is 39 measures long and takes approximately two and a half minutes to play. It is in the key of G♭ major.

The piece, named after the eponymous poem by Leconte de Lisle, is known for its musical simplicity, a divergence from Debussy's style at the time. Completed in January 1910, it was published three months later and premiered in June of that same year. The prelude is one of Debussy's most recorded pieces, both in its original version and in subsequent various arrangements.

The prelude's central idea takes after its title – a girl with golden hair in a pastoral setting in Scotland. Thus, it is one of many examples of Debussy's Impressionist music, since it conjures up images of a foreign place. His utilization of pentatonic scales throughout the piece achieves this, and by blending this in with harmonizing diatonic chords and modal cadences, he creates a folk-like tune. This prelude uses more plagal leading tones than any other piece composed by Debussy, and the prelude's melody alternates between conjunct and disjunct movement throughout.

The piece begins with its well-known opening theme consisting of three-note phrases, grouped together as one eighth note and two sixteenth notes. It finishes with chords that form a plagal cadence between bars 2 and 3, an element that is not featured in his previous preludes. The second part of the melody enters in bars 3–4, evoking a Scottish ballad or resembling a tune in the style of Edvard Grieg. The melody from the opening returns in bar 8 with added harmony in the left hand. At bar 19, the melody begins its ascent to the climax of the piece, gradually building up through the use of crescendo to propel it to peak at the end of bar 21. Near the end of bar 22, the melody decrescendos to the subsequent measure, where the theme of the climax is repeated an octave lower. A pianissimo drone-like part that moves in parallel motion—featuring consecutive fifths in some places—comes in at bars 24 to 27. In the next measure, the prelude's coda sees the return of the opening theme one last time—albeit at an octave higher—followed by the droning motif. Finally, the melody ascends in parallel movement and makes use of a final plagal leading cadence to get to the home key chord in root position. This cadence neither "melodically anticipates the arrival pitch"[18] nor does it include the tonic in the left hand. Thus, it has been described as "the ideal harmonization of the plagal leading tone." The melody ends with two arpeggiated octave chords (D♭ in the left hand followed by G♭ in the right), bringing the prelude to a close.

he title La fille aux cheveux de lin was inspired by Leconte de Lisle's poem by the same name, one of his Chansons écossaises (Scottish songs) from his 1852 collection Poèmes antiques (Ancient Poems). The image of a girl with flaxen-coloured hair has been utilized in fine art as a symbol of innocence and naivety. Musical writers have suggested that Debussy's successful portrayal of these emotions was tied in with the musical simplicity of the prelude—specifically, the technical and harmonic elements. His choice of simplicity for this piece was highly unusual, since it deviated from his style at the time and brought back the simple harmonies that he had utilized in his earlier musical compositions, which were more traditional.

Debussy had previously utilized the title for a mélodie he wrote from 1882 to 1884. However, it does not feature any similarities to the 1910 prelude, and merely has a "distant familial relationship" with the prelude at most according to James R. Briscoe in the music journal 19th-Century Music. The song, which is one of his earlier works and remains unpublished, was dedicated to Marie-Blanche Vasnier. She had an affair with Debussy at the time, and he dedicated most of the compositions he wrote from 1880 to 1884 to her. 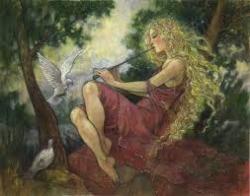