By: Composed by the NROK/Buddy Petit?
For: String orchestra
This music is in your basket
View basket
Loading... 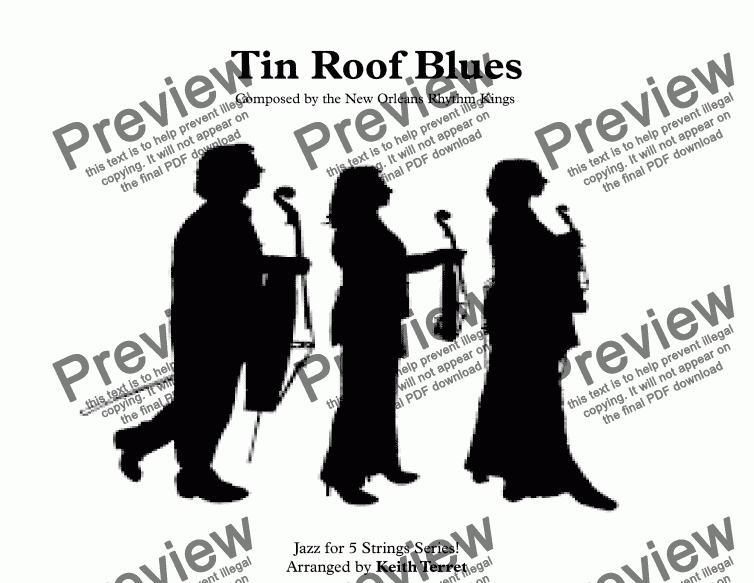 By: Composed by the NROK/Buddy Petit?
For: String orchestra

Composer
Composed by the NROK/Buddy Petit?
Year of composition
1923
Arranger
Keith Terrett
Year of arrangement
2018
Publisher
Music for all Occasions
Difficulty
Moderate (Grades 4-6)
Duration
3 minutes
Genre
Blues music
License details
For anything not permitted by the above licence then you should contact the publisher first to obtain permission.

An arrangement of Tin Roof Blues for String Orchestra

The origin of the composition has caused some controversy over the years, it has been claimed that the tune was based on New Orleans pianist Richard M. Jones’s earlier composition "Jazzin’ Babies Blues", specifically Joe "King" Oliver’s rendition of it. Oliver recorded Jones’s tune in June 1923, two months after NORK’s "Tin Roof Blues" was released. Listeners claimed that the NORK had already been playing the tune several months before recording it. Jazz critic Martin Williams argues in his book that "the only real similarity [he] hear[s] between them is that they are both 12-bar blues."

First recorded by the New Orleans Rhythm Kings, Richmond, Indiana, March 12-13, 1923. Said to be an early blues riff by legendary New Orleans cornetist Buddy Petit, the theme was called ‘Rusty Nail Blues’ around New Orleans. The verse is a 12 bar blues statement leading to the famous riff that is also a 12 bar blues form. This is the melody that has been renamed a number of times: “Jazz Baby Blues” in 1926, “Make Love To Me” in 1950 as recorded by Kay Starr.i1