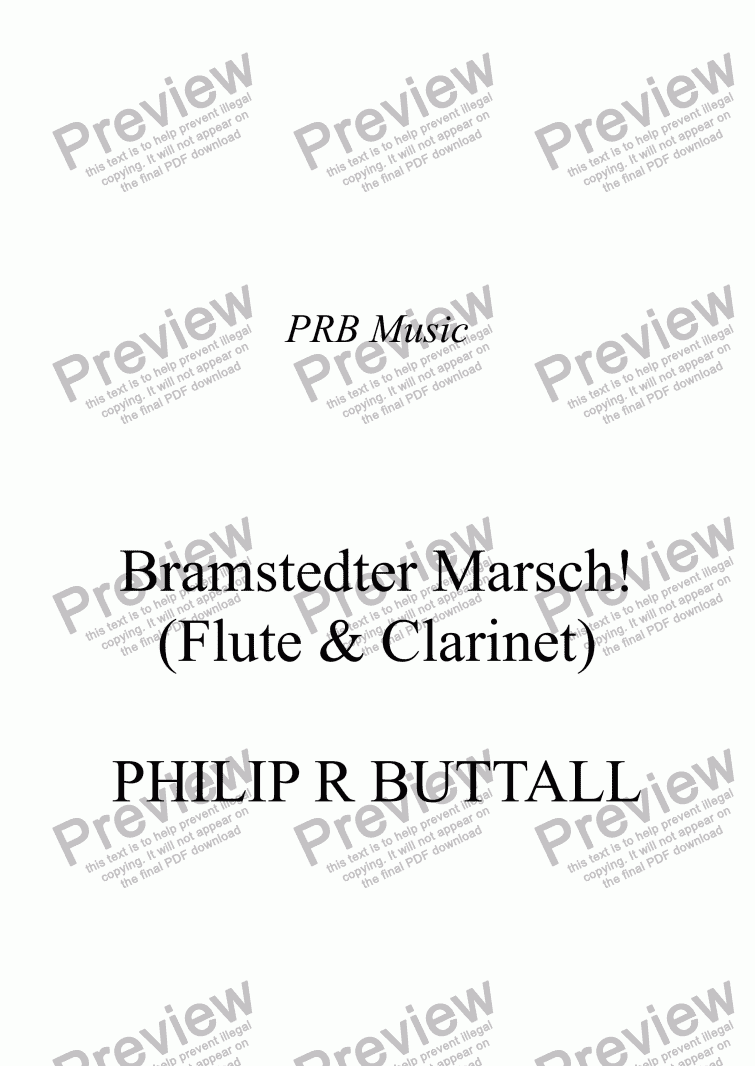 Composer
Philip R Buttall
Year of composition
2003
Lyricist
none
Publisher
PRB Music
Difficulty
Difficult (Grades 7+)
Duration
3 minutes
Genre
Classical music
License details
For anything not permitted by the above licence then you should contact the publisher first to obtain permission.

Most summers I used to like to visit my dear friends, Peter, Roberta & Princess Grainne (the soft-coated Irish Wheaten terrier!), who live about half an hour to the south of Bremen, in the village of Bramstedt, North Germany. Last year, as I was walking down the straight, flat road across the fields, on my way to Bramstedt ’International’ (actually just a platform on the main railway line!), this little march tune came to me, rather in the manner of a Beethoven sketch - but whereas he jotted it down in a notebook, I hummed it into my mobile phone’s voice memo!

In April 2003, I was one of three local composers to share a lunchtime recital where some of our works were performed. Having an excellent flautist and clarinetist at my disposal, I decided to use the tune for the two of them, with me at the piano. It is very much intended as a tongue-in-cheek, fun German march, with a direct lift from a famous German folksong in the trio, and another brief Germanic reference at the end!

The accompanying MP3 file is a recording of the work’s premiere at Plymouth City Museum, with Anne Kimber (flute) and Peter Cigleris (clarinet).

I have included the following parts: a separate Flute, and Bb Clarinet part respectively, a combined score which includes both the Flute and the Clarinet part. The pianist has two options: either use the Full Score (this includes piano, flute and clarinet together), or the Piano Accompaniment part - this has just the piano part, so the other two instruments aren't cued in, but is just a little less unwieldy on the music stand, if required.